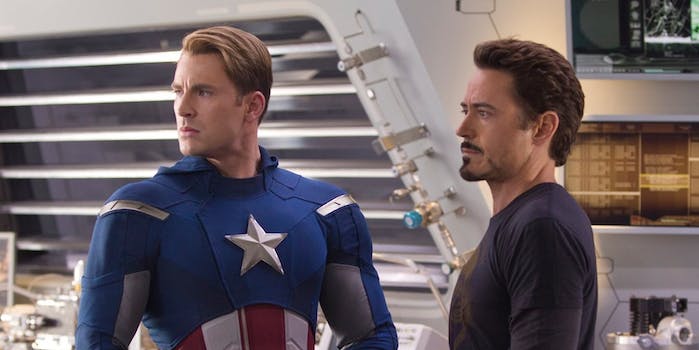 Marvel Studios revealed the first footage from Captain America: Civil War on Saturday, bringing back the Winter Soldier and introducing the rift between Steve Rogers and Tony Stark.

The teaser aired to a limited audience at Disney‘s D23 Expo, meaning that everyone else had to content themselves with descriptions of the footage. But since Civil War is the most dramatically significant plot twist in the Marvel Cinematic Universe so far, those descriptions were enough to cast the entire fandom into emotional turmoil.

'You know, he remembered you. Your pal, your buddy, your Bucky.' pic.twitter.com/BeSBiJEblA

The above quote is from Crossbones (formerly HYDRA agent Brock Rumlow) in the teaser, and is the reason why some fans are having a very understandable meltdown about the Winter Soldier’s status in Civil War. If Bucky Barnes doesn’t get some kind of closure (or at least a hug) by the end of this movie, there will be hell to pay.

Elsewhere in the teaser, the D23 audience caught their first glimpse of Chadwick Boseman as Black Panther, a brief scene with Ant-Man being starstruck by Captain America, and a battle pitting the Avengers against each other. Tony Stark’s big moment was telling Steve Rogers, “Sometimes I want to punch you in your perfect teeth,” a sentiment that was already fairly obvious during the first two Avengers movies.

Marvel hasn’t posted that Civil War teaser yet, but you can watch an edited version of the studio’s panel from MCU mastermind Kevin Feige. The presentation was characteristically spoiler-free, but Marvel did bring out Anthony Mackie, Chris Evans, and a video message from Benedict Cumberbatch regarding the upcoming Doctor Strange.

This video edited out one of the odder moments for the night, which was Cumberbatch describing Doctor Strange as if it was a Bond movie:

This description probably sent a shiver of apprehension down the spines of Doctor Strange fans, but it should be taken with a heavy pinch of salt. Other quotes from Marvel Studios sources have emphasized the idea of Doctor Strange retaining the weird, psychedelic tone of the comics, which would make sense because Marvel already has about 10 traditional action/adventure franchises on its hands.

Marvel hasn’t revealed when the D23 footage will be posted online, but either way it won’t make the wait any easier. Captain America: Civil War isn’t due out for another nine months.