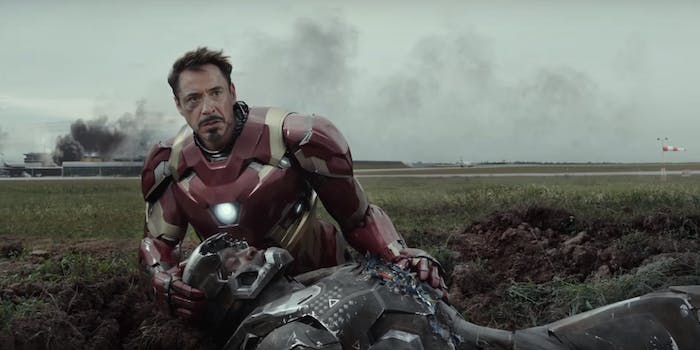 Captain America: Civil War takes its name from an iconic Marvel storyline, but its trailer reminded us of the huge differences between the comics and movie franchise. Specifically, Iron Man and Captain America were never really friends in the Avengers movies.

In the Civil War comics, the conflict was twofold: the personal rift between Steve Rogers and Tony Stark and the wider political divide over the Superhuman Registration Act. Since Cap and Iron Man had been friends for decades of comics canon, this was a compelling story with a heartbreaking end. But in the Marvel Cinematic Universe, these characters share far less emotional backstory. If Civil War characterized the conflict as a battle between former best friends, it just wouldn’t ring true.

One exchange in the trailer already has fans furiously analysing that central dispute. “You know I wouldn’t do this if I had any other choice,” says Steve Rogers, referring to his defense of the Winter Soldier, aka Bucky Barnes. “But he’s my friend.”

Except, you know, he wasn’t.

Yeah. Natasha siding with Tony is a much more significant blow to Steve. They have a stronger friendship in the MCU. https://t.co/f2G11afUqy

Cap and Iron Man have an antagonistic relationship in both Avengers movies, frequently getting on each others’ nerves. They fight against common enemies, but there’s very little evidence of them enjoying each other’s company. Tony seems to find Steve uptight and moralistic, while Steve thinks Tony is reckless and rude. For Civil War, this leaves us with two options. Either the film will manufacture a closer relationship between the two characters, or it will continue what we’ve already seen earlier in the franchise.

So when Tony protests that he was Steve’s friend as well, a number of explanations spring to mind. The most interesting possibility is that Tony simply doesn’t understand how friendship works.

Tony Stark has one of the most consistent and complex character arcs in the MCU, spread over the Iron Man trilogy and both Avengers films. He’s a socially isolated genius with serious PTSD and father issues and has only had three friends for most of his adult life: Rhodey, Pepper Potts, and JARVIS, who died (more or less) in Age of Ultron. Each of these characters act as his caretaker at one time or another, reining him in and attempting to ameliorate his self-destructive tendencies.

Then in The Avengers, we see him designing apartments for the other Avengers just days after they first meet. In his keenness to join a team of heroes he can trust and respect, Tony elevates the other Avengers to BFF status before those friendships have a chance to develop onscreen. He’s so unfamiliar with functional human relationships that Steve’s “betrayal” in Civil War may partly take place inside Tony’s head, an echo of the very real betrayal by his mentor Obadiah Stane in Iron Man.

Meanwhile Steve Rodgers has every reason to distrust the military/industrial complex Tony represents. After all, Steve just oversaw the destruction of S.H.I.E.L.D. (and HYDRA), and had a front-row seat for the birth and rise of Ultron. As for the matter of their personal relationship, Steve’s closest friends are Bucky, Sam Wilson (Falcon), Natasha Romanoff (Black Widow), and Peggy Carter. The other Avengers are more like his brothers in arms.

It’s easy to imagine Tony interpreting their interactions as affectionate bickering while Steve just thinks Tony’s being a dick. It’s even easier to see Tony taking it personally when Steve’s lifelong friendship with Bucky trumps any loyalty he had to Tony and the Avengers.

When Marvel announced the title of Captain America: Civil War, many fans were concerned that Iron Man might hijack the final act of Captain America’s story arc. The new trailer thankfully suggests otherwise, and regardless of Steve and Tony’s friendship (or lack thereof), the main conflict is still very compelling.

Instead of relying on the formula of introducing a new villain for each movie, the Marvel franchise has engineered a clash between two beloved characters who you can root for on their own terms. Between Tony’s paranoia and Steve’s wariness about government interference (and his devotion to Bucky), this rift already seems inevitable. But it’s a very different Civil War from the one we saw in the comics.