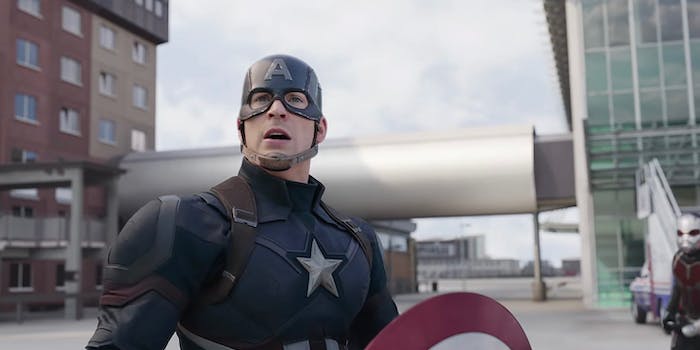 One of the downsides of the Marvel films is that characters like Iron Man and Captain America don’t really have an inner monologue like they often do in the comics. Which is a real shame because they could change the game, especially if the voice in your head is Billy Eichner.

One Twitter user combined a clip of the airport fight from Captain America: Civil War with audio from Eichner’s show Billy on the Street to create something special. Captain America is rallying all of the other superheroes to his side as they try to get to the next point, but there’s an extra sense of urgency that possible arrest and even more damage couldn’t cause now that Cap is urging the lesbians to run with him.

it’s midnight and i’m tired so i made this pic.twitter.com/Joh59j4qxk

The clip has since gotten the attention of both Eichner and Chris Evans, the latter who put Cap’s stamp of approval on the whole thing. Finally, people have realized the level of genius he was trying to achieve.

Hey @ChrisEvans this is what happened when someone put audio from Billy on the Street into Captain America https://t.co/euHWkoVTO4

That’s exactly what I was going for in that moment. I’m glad someone picked up on my inner monologue. https://t.co/NpbHb4Brie

This is now canon—and we can only imagine what’ll be going through Captain America’s head in Avengers 4.