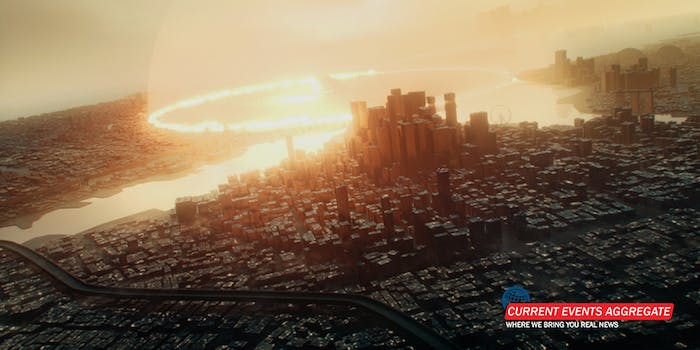 Breaking news reports on social media of terrorist attacks and disasters are distressingly commonplace. And somehow, someone decided this stressful culture made for a good video game publicity stunt.

As part of a marketing strategy for the upcoming Call of Duty: Black Ops III, Activision re-skinned the official Call of Duty Twitter account into an account for a fake news agency, called “Current Events Aggregate,” and dropped some hints as to the plot for Black Ops III.

The plotlines from Call of Duty games, like terrorists seizing control of military drone fleets or nuclear detonations in the upper atmosphere above the United States, would make for terrifying news reports were the events true, as demonstrated by the fake news reports concerning an explosion in Singapore, followed by massive civil unrest.

The Call of Duty account has since returned to its usual identity, but Twitter user @athenahollow grabbed a snapshot of both what the account re-skin looked like, and what the sum total of Web reaction to the stunt was going to be.

Several hours after the fusillade of fake news reports ended, Activision closed the circle by making it clear this was all just a marketing ploy.

This did not go over well, with a lot of people. Here are responses from the first fake news tweet, alone.

@CallofDuty I was going to buy this game but not now. Your choice of marketing is reprehensible. The marketing director should be fired.

@CallofDuty This tweet comes at a bad time considering with what's going on in the world. This turns me away from further buying COD games.

@CallofDuty can we not have companies making fake claims of global terrorism ??? Where is the marketing disclaimer? have some sense.

We get it @CallofDuty ,You're trying to paint a picture for us so we can be excited for COD. but instead you're actually scaring people.

At least one person didn’t see the big deal.

@CallofDuty People are butt hurt about it. Use your eyes people. It said call of duty on it the whole time.

Another found the stunt amusing enough.

@CallofDuty I'm not sure why all these guys are talking about a video game, Current Events Agg. is a highly respectable news source.

And over the course of the day, the percentage of outraged responses to further tweets in the fake news chain faded in favor of responses from Call of Duty fans, and general gamer snarkiness.

@CallofDuty haters can suck it. In excited to play this game!

.@CallofDuty have run out of money so they're renting out their Twitter

But the Straits Times, out of Singapore, was not amused. The International Business Times picked up the story. A BBC News correspondent in Singapore even put together a timeline as if the event were real. Activision did not respond to request for comment.