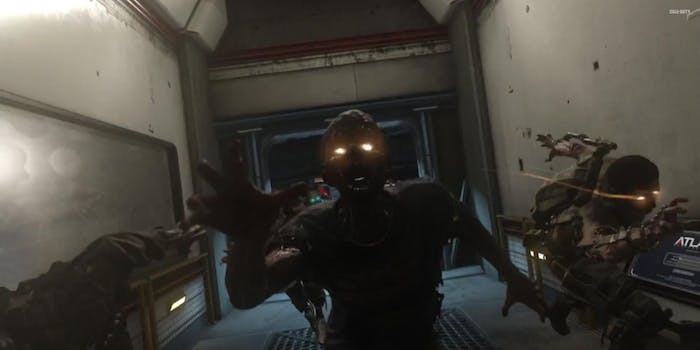 Kevin Spacey is no longer the only awesome actor in Advanced Warfare.

John Malkovich, Bill Paxton, Rose McGowan, and Jon Bernthal will star in the newest story within the stupid-popular series of Call of Duty zombie games. This is why gamers get excited for them.

Call of Duty games have featured zombie modes since World At War in 2008, and zombie mode has grown popular enough that it probably sells copies of Call of Duty on its own. For Call of Duty: Advanced Warfare, developer Sledgehammer Games is taking its new gameplay element, the combat exoskeleton, and giving it to the undead.

In other words, never mind “shamblers” versus “runners” when it comes to zombie types. Now we can add “superhuman whoa they’re smashing through the walls” zombies.

During the course of the Advanced Warfare single-player campaign, the private military firm Atlas, owned by Kevin Spacey’s character Jonathan Irons, makes a play to take over the world. It seems as though the Exo Zombies storyline is hinged on a nuke getting dropped during that conflict. Everybody knows that radiation turns dead people into zombies, only this time the zombies were wearing combat exoskeletons when they died and reanimated. Hence the zombie super powers.

Malkovich, Paxton, McGowan, and Bernthal will play employees of Atlas who get left behind by their employers and subsequently have to face the robot-enhanced undead. This is not the first Hollywood cast to appear in a “zombies mode” storyline. Robert England, Sarah Michelle Gellar, Danny Trejo, Michael Rooker, and even zombie godfather George A. Romero himself have starred in Call of Duty zombie stories.

Activision has also revealed some new information as to how and when Exo Zombies mode is going to be delivered. The first chapter will be included in the Havoc DLC, the very first downloadable content to be released for Call of Duty: Advanced Warfare. It’s supposed to drop in 2015, but we don’t know when. It ought to be relatively early in the year, if Activision follows the usual pattern of DLC releases for a Call of Duty game.