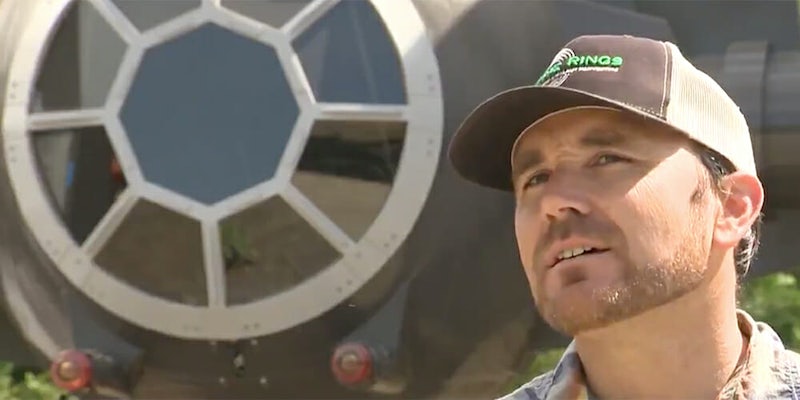 An almond farmer from Turlock, California, has built a life-size replica of a Star Wars TIE fighter—and it’s as cool as it sounds.

Erich Gemperle, who’s a dad of three in addition to being a hardcore Star Wars fan, told KCRA-TV he noticed one day that one of his water tanks looked curiously like the fictional spacecraft. A year of labor and $13,000 later, he has his own 46,000-pound model fighter.

“It was just a matter of time and strength to get it done,” Gemperle told the TV station.

Sitting on a farm in Turlock, nestled in a clearing between rows of almond trees and a barn is a daunting 14-foot steel spaceship.

He built the 14-foot TIE fighter—which has a functioning driver’s hatch—using a water ball tank and thousands of dollars worth of steel. The design is based off a large toy model, plus Gemperle’s extensive knowledge of the Star Wars movies, which he’s been passing on to his kids.

After finishing the pet project, Gemperle paraded his TIE fighter through nearby Modesto.

“Everybody just got a kick out of it,” Gemperle said.

Maybe next, he’ll go for a life-size Millennium Falcon.