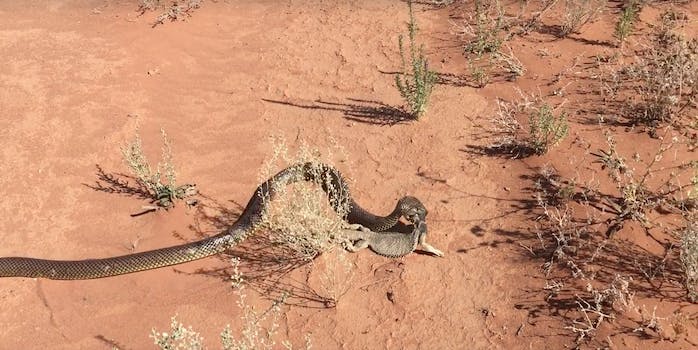 Africa is home irritable three-ton hippos and North America is crawling with everything from tarantulas to grizzly bears, but pretty much everyone agrees no continent can beat Australia when it comes to scary wildlife.

Just take this scene stumbled upon by Andrew Hull in the Central West region of New South Wales, Australia, on Friday.

“So I’m driving up the river road from Wilcannia, composing a poem for Ian Marr, heart full of the bush, the autumn sun, and the wide red road, upon which lay a sizeable [sic] brown snake eating a bearded dragon. I thought ‘bugger me—Australia!!'” Hull wrote in a post to his Facebook page.

So I'm driving up the river road from Wilcannia, composing a poem for Ian Marr, heart full of the bush, the autumn sun, and the wide red road, upon which lay a sizeable brown snake eating a bearded dragon. I thought "bugger me – Australia!!" Then thought 'the only thing this scene needs is a barefoot bogan to film it on his phone and stick it on Facebook'….So I did.For licensing or usage contact licensing@viralhog.com

If Australian stereotypes could be distilled into a single Facebook post, this would be pretty close to perfect. All it’s missing is a cameo by Crocodile Dundee and some shrimp on the barbie.

According to Australian news station NITV, the large snake seen dragging a bearded dragon in the video is likely a female Western Brown, which—you guessed it—is highly venomous and could totally kill you. Australia!

And in case you can’t get enough of terrifying critters having lunch, NITV also shared this video filmed near Sydney over the weekend of an absurdly huge wasp hauling home a large huntsman spider.

The creatures in both of these encounters were clearly just minding their own biz, not posing a threat to curious humans. That said, we’ll continue to observe Australia’s natural wonders from the safety of our computers.