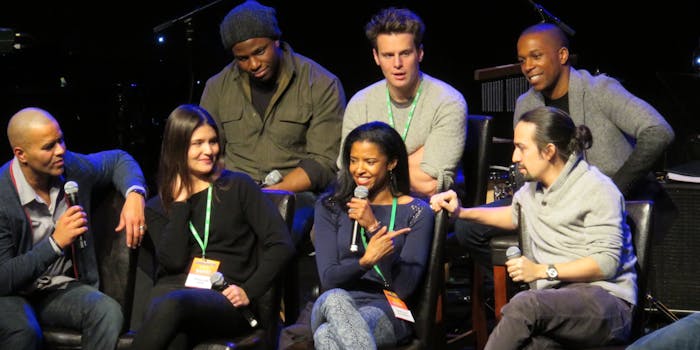 9 things we learned from the Broadway Con ‘Hamilton’ panel

The biggest panel of Broadway Con left stars in our eyes.

“All day I been prayin’ Imma see a little Eliza Schuyler cosplayin‘,” rapped Lin-Manuel Miranda yesterday during a freestyle backed by a beatbox from co-star Phillipa Soo. Miranda’s inspiration came from the thousands of eager fans who packed the grand ballroom of the New York Hilton Midtown for the biggest event of Broadway Con—the Hamilton panel. 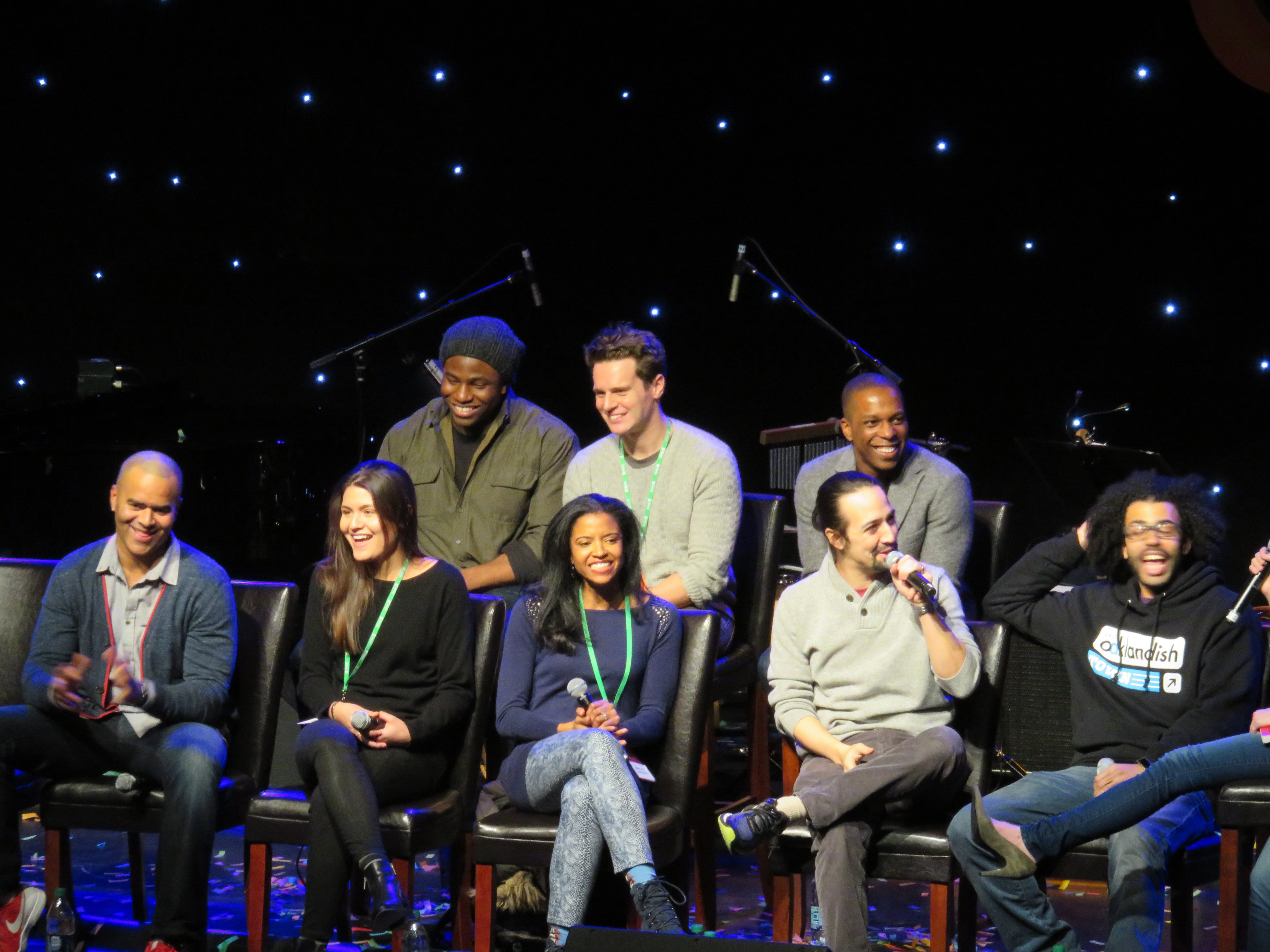 Despite cultivating a culture of loyal and avid fans, Broadway has never before had a fandom convention. So it’s fitting that the first outing of Broadway Con also played host to one of the biggest fandom phenomenons in recent memory. Most of the fans who crowded into the con’s main stage hadn’t actually been able to get tickets to see Hamilton, which is typically sold out weeks in advance. But for those who live in New York or were able to make the trip, yesterday’s panel offered a slice of the magic of the show itself.

The cast joined Playbill Editor-in-Chief Blake Ross to discuss the ins and outs of the show that’s become a major cultural force. Here are some of the things we learned.

1) Hamilton’s biggest lesson is an apolitical one Miranda had a rather surprising answer to a question about the show’s political themes. “The main takeaway from Hamilton is an apolitical one,” Miranda said. “We’ve been fighting about the same things for 200 years.” Miranda stressed that this fact highlighted the truism that we have more in common with previous generations of Americans than we might initially realize.

Fielding a question about President Obama‘s enjoyment of the show, Leslie Odom, Jr., who plays Aaron Burr, revealed that not only did he enjoy it, he basically sent Joe Biden to see it. When Biden came, just a few weeks after Obama did, he told the cast that he had to see it because Obama “couldn’t stop talking about it.”

On Broadway, Daveed Diggs plays the double-cast role of General Lafayette and later Thomas Jefferson, famously an enemy of Hamilton’s. Diggs perfectly embodies Jefferson’s bourgeois hypocrisy—and it’s clear from his discussion about Jefferson that he’s thought a lot about the paradox between Jefferson’s noble ideals of freedom existing alongside his commitment to slavery. Diggs explained that he feels Jefferson, born into power and wealth, “had the time to come up with these brilliant ideas… while also owning 600 slaves.”

He also pointed to a fact about Jefferson that surprised most members of the audience: Jefferson hated dogs. Looking into this further yields the interesting contrast that Jefferson expressed “hostility” towards the animals and wanted to “exterminate the entire species”… while also owning several sheepdogs of his own.

Diggs, who famously raps furiously as Lafayette, was already adept at freestyling, and actually got introduced to Hamilton after freestyling about famous athletes on ESPN. (“His requests to me usually come with checks,” he quipped.) But many of the rest of the cast, most of whom are more traditionally trained in musical theater, didn’t have that experience—so Miranda’s approach is to push them out of their comfort zones by randomly and spontaneously challenging his cast members to freestyle, putting them on the spot at any given moment.

Renée Elise Goldsberry, who plays the bold and independent Angelica Schuyler, said she was challenged by this at first but now finds it empowering. When a fan asked if she was a rapper, she commented, “I am now.”

Goldsberry said she almost didn’t take the part of Angelica out of fear. Then she dropped these zen words of wisdom on the audience:

“Say yes,” she said. “Show up afraid. Show up prepared, but show up afraid, and you never know what’s going to happen.”

According to Phillipa Soo, who plays Hamilton’s wife Eliza, one of the striking things she’s heard at the stage door after the show is the gratitude of her Asian fans.

7) Leslie Odom, Jr. found out about Hamilton through a “Burr” pun

If you’ve listened to the Hamilton cast recording, you’ll know that it’s riddled with puns and rhymes around the word “Burr.” Evidently, Miranda couldn’t stop dropping puns even when he wasn’t writing lyrics. Odom related that when Miranda emailed him about playing Aaron Burr, he titled the subject “Octo-Burr-fest.”

Let it be known: Miranda may be a genius, but he’s also a dork.

Jonathan Groff, the Tony-nominated actor who voiced Kristoff in Frozen, was arguably Hamilton‘s most famous cast member prior to the show. His role, the haughty and privileged King George III, is the only role in the cast designated specifically for a white actor—and is written as a cameo that can be played by guesting big-name actors who need to step in quickly. Asked which other role he’d want to play, Chris Jackson, who plays George Washington, responded, “I’d want to be the guy who’s only onstage for nine minutes!”

But Groff’s reaction to the part was very different. Manuel asked Groff if he’d be interested in taking over the role after another Broadway heavyweight, Brian D’arcy James, left during Hamilton‘s off-Broadway run in order to star in Something Rotten! But Groff hadn’t seen the show, so Miranda took him to a performance. Groff described being overwhelmed when he realized what he was being asked to be a part of—and how he basically cried through the whole thing. Miranda confirmed, joking, “I was kinda like, ‘Girl, get it together.'”

In addition to the general cultural zeitgeist that both shows have legendarily tapped into, Rent and Hamilton share a number of commonalities. Both shows successfully merged musical theatre with contemporary music to make something new and electrifying. Both shows have fostered a cult of personality around their creators—Jonathan Larson’s death just before Rent‘s opening night famously boosting his legacy in absentia. And both shows share cast members: Renée Elise Goldsberry played Mimi on Broadway, and Leslie Odom, Jr. was the youngest person ever cast in the show when he played Paul at 17.

“Rent is the show that opened up my heart,” Odom told the crowd. “I haven’t felt that way about another show until now.”

Odom made the point that original casts leave behind their own legacy to protect for the people who follow them into the theatre. “There is something that they leave behind, the original company, something that is in the wood. They show you how to do it, and you are quite literally walking in their footsteps.”

The love goes both ways: Later, during a special 20th anniversary Rent panel, the show’s original cast and production team had a lot to say about Hamilton. After discussing the many similarities between the two shows and the fandoms they’ve inspired, cast member and Broadway Con co-founder Anthony Rapp commented, “The key difference between Rent and Hamilton is that Lin-Manuel Miranda is alive to see it happen.” For a cast that never got the chance to properly mourn their show’s creator, the celebration around their cultural phenomenon was “amazing and terrifying.”

But throughout yesterday’s convention, where new ideas were definitely in the air, the mood was jubilant. Twenty years after one iconic show changed Broadway, another iconic show is doing it all over again, and these fans were eager to be a part of it in any way they could. All you had to do was look around, look around, to see a theatre community eager to celebrate history happening in Manhattan.