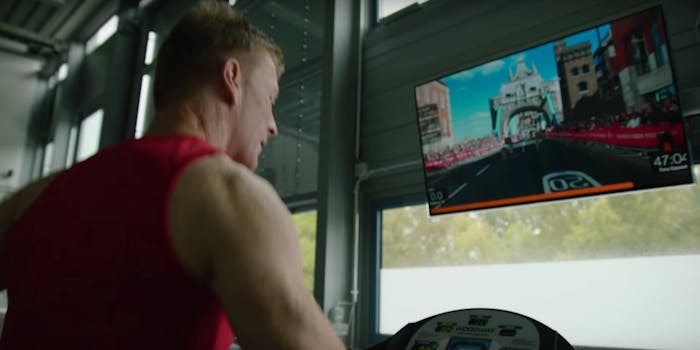 Tim Peake will have the coolest marathon story ever.

Tim Peake will literally be running in a space race. The British astronaut plans to remotely run next year’s London Marathon on a treadmill on the International Space Station, a feat that will make him the first man to run a marathon in space.

Peake begins his 173-day mission to the ISS on Dec. 15. He will have to wear a weighted harness to combat the low gravity of the constant free fall of orbit. Such measures are important to preserve bone density and muscle mass in space. The astronaut told the Associated Press that he ran the marathon in 1999 in 3 hours, 18 minutes, and 50 seconds. The ISS orbits the earth in about 92 minutes, so if Peake makes the same time as he did in 1999, the ISS would have circled the Earth twice by the time he finishes.

However, Peake told the AP that he probably won’t be setting any personal records, because he’ll be under different physical conditions that require monitoring his health.

Peake exemplifies the intrepid explorer concept of an astronaut. In his spare time, he enjoys scuba diving, climbing, and mountaineering. In his professional life, he has spent time in the air as a pilot and under the ocean as a researcher in NASA’s Extreme Environment Mission Operations.