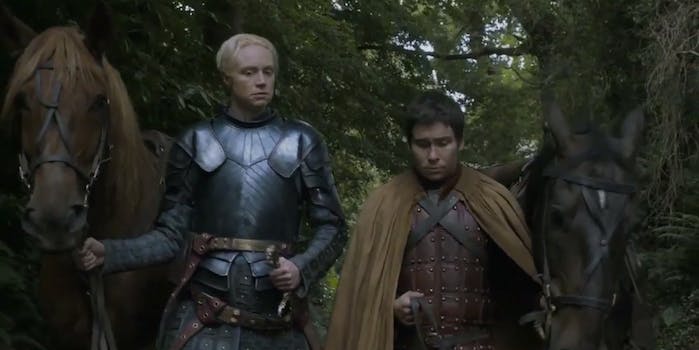 Who knows what hijinks they'll get themselves into?

If we could, we’d scoop up all of our favorite Game of Thrones characters from the terrible things that happened (and are bound to happen) to them in Westeros and set them off on a happy yet thrilling adventure. It wouldn’t really make for the intense fantasy drama we love to watch, but it just might be one hell of an ’80s sitcom.

Enter Brienne of Tarth and Podrick Payne, two companions sent off on a mission from Jaime Lannister and Catelyn Stark to find Sansa Stark, wherever she may be. There will be some sort of sage figure to give them wisdom and the wacky side character to help them along.

And who knows what hijinks Pod, the inexperienced squire with a heart of gold, and Brienne, the lady bound by honor to fulfill Lady Catelyn’s vow, will get into? But we’re pretty sure it’ll go a lot better in this version than what will probably come of their search on the show as the two have to learn to get along together.

Even better? The video uses the Perfect Strangers theme song for that true ’80s feel.