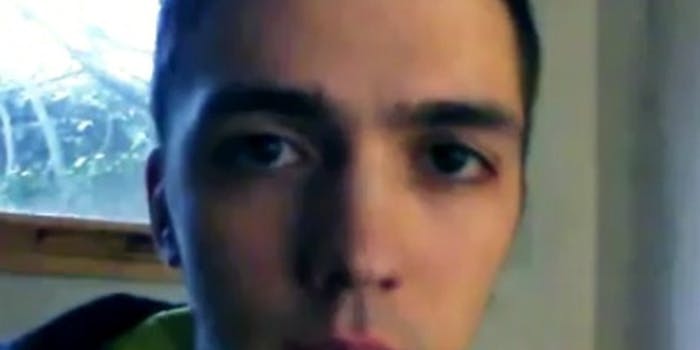 He wanted to work with an exclusively World of Warcraft network, friend said.

Braindeadly, a British World of Warcraft commentator, didn’t read the fine print. If he did, he would have realized that when he signed a contract with Machinima, the video game network on YouTube, he signed for life.

The only option left to Braindeadly is to cease making videos.

“If I’m locked down to Machinima for the rest of my life, if I don’t have any freedom, then I don’t want to make videos anymore” said Braindeadly over light piano strains, in his 1:09 farewell video uploaded hours ago.

Braindeadly, who has been on the site for nine months, has collected 4.5 million views on his 81 videos since.

“I don’t know how to say goodbye but I wanna thank you guys for making me realize that my dreams were within reach,” wrote Braindeadly at the start of his video. “Please don’t make the same mistake I did and always read before you sign something.”

Titled “Thank you, I will miss you guys,” Braindeadly’s video has already collected 19 video responses, and some are leaving Machinima in protest, like fellow gamer Athene Wins.

One such response video is leetk3zzer’s three minute video, titled “Open Letter to MACHINIMA.” Leetk3zzer criticizes Machinima for lacking “honesty and integrity” in its quest to “make as much money as possible.”  According to Leetk3zzer, who calls himself one of Braindeadly’s best friends, Braindeadly wants to leave Machinima to go to a network that is focused purely on World of Warcraft—he wasn’t trying to leave for a higher paycheck as some have speculated.

On social news site Reddit, Braindeadly’s video is making waves in the Gaming section. Linked two hours ago, the thread has already collected more than 600 angry comments and more than 2,000 upvotes.

Angry Redditors, and Braindeadly supporters, have taken to spreading copies of Machinima’s contract, including the clause in question, which reads:

“[T]his Agreement shall commence on the effective date and continue in perpetuity unless otherwise terminated by Machinima in its sole discretion, with or without cause, upon the provision to Director of 10 days notice at the address or email first set forth above.”

“Pretty shitty of Machinima to do this,” wrote Redditor Whaffle. “A lot of their producers are pretty young and I bet they are not made aware of the fact they are basically signing their content away for life.”

“Is that even legal?” asked Redditor My_Wife_Athena. “Sounds like an illegal contract to me.”

In an interview with the Daily Dot last year, Household Hacker manager Justin Matthew said YouTubers, especially the younger ones, get taken advantage more often than not when it comes to fine print in contracts.

“Not every YouTuber has an older brother that can be a manager,” said Matthew. “Some YouTubers overlook the fine print because they are so happy to be signed and I think some people could have gotten a better deal if they had a manager.”

This isn’t the first time Machinima has landed in hot water over its directors trying to leave the network. Gamer KSIOlajidebt tried to leave Machinima in late March.

A Machinima rep told the Daily Dot at the time, “contracts are rarely terminated” and it’s “always on a case by case basis” usually because of “channel content, performance issues, or failure to compile with ours or YouTube policies or other unusual circumstances.”

Machinima was not available for comment at press time.

One YouTuber who successfully left Machinima, is Happy Cabbie, who had his contract terminated in late February due to reply-girl-scandal collateral damage. In an email to the Daily Dot today, Happy Cabbie explained he was able to leave because he was not a “director,” which has a higher pay rate, but an “entertainer” which “now are 5-7 year contracts.”

Meanwhile, all the attention Braindeadly’s video is getting from the gaming community on YouTube and Reddit has “overwhelmed” him. He tweeted, “thankyou so much for all the support.”