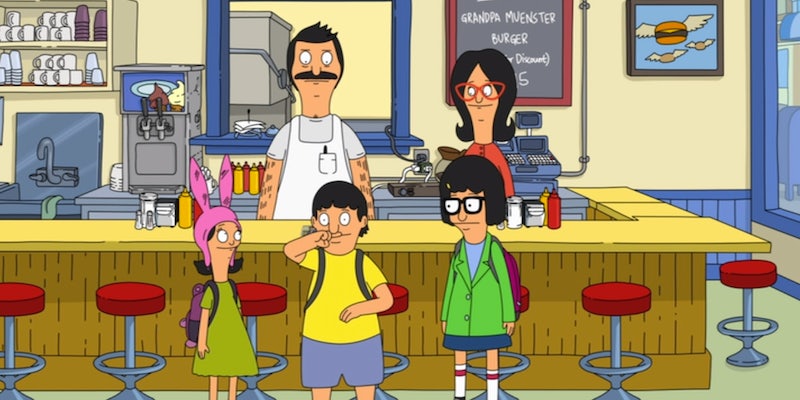 The secret sauce behind ‘Bob’s Burgers’

Bob's Burgers is entering its fifth season and fans can't get enough.

Bob’s Burgers is already five seasons in, but it’s showing no sign of slowing down.

It’s just another way to see just how far the show has grown since it was originally pitched as a story about a family-run restaurant—and they’re cannibals. Bouchard said that network executives loved the idea but asked, “What if they’re not cannibals?”

The resulting series about the restaurant that could—despite competition from the always-changing next-door neighbor (in one of Bob’s Burgers‘s many recurring gags)—resonated with fans. The Internet is full of Belcher fanart, Tina Belcher has become a feminist icon on Tumblr, with one person proclaiming, “I think we can all agree that Tina Belcher is the cartoon embodiment of Tumblr.” It’s hard to go on your Dashboard without seeing GIFsets of her wisdom. The supercuts are clean, and they come from a place of love. Many of the fans find the catchphrases a hoot, not necessarily annoying.

At least one person has made it his mission to recreate every single pun-heavy Burger of the Day featured on the show, each one a drool-worthy masterpiece in the making. It even has a seal of approval from Bouchard, who insists that Bob’s burgers are delicious. One restaurant even offered a 10 percent discount if patrons ordered their meal by using Linda Belcher’s voice.

Heading into the fifth season, each of the main actors pretty much have their characters figured out, but they’re still learning new things about them with every script. With upcoming episodes involving Linda trying out a new persona after accidentally dyeing her hair blonde, Tina’s relationship with a ghost in a shoebox, a venture into a high-end grocery store, and the first appearance of Bob’s dad in the Christmas episode, there is plenty to explore.

And unlike most shows, the Bob’s Burgers cast records episodes together, which makes it ripe for improv.

“The fun thing about Louise—at first, I was nervous people wouldn’t like her her because she’s so out for scheming and for herself,” Kristen Schaal explained. “But then she does have these turns and I think people like her even more. I just want Louise to be even more popular than Tina.”

Bouchard also promised that the Bob’s Burgers soundtrack is nearly ready, which is great news for anyone who loves any of Linda’s or Gene’s songs—or Die Hard: The Musical. He’s still trying to figure out how to make a Bob’s Burgers and Archer crossover (which already happened on Archer) feel true to his show. H. Jon Benjamin voices the lead character on both.

“I’m very much like Bob even in real life,” he said. “I think the only difference is I’m a little more cynical than Bob. When I do play him, Loren will often have to hold me back from being too negative and hate my kids and hate Linda because she’s so hateable. So I have to pull back from that. Loren’s big note for me is, ‘You love your wife.’”

While Benjamin sees himself in Bob, Roberts—his TV wife—gets his inspiration from someone closer: his mom, who he’s been mocking his entire life.

He promises that fans will get to see new sides of Linda this season, and with each year he sees more and more Linda cosplay at conventions. Tina may be the favorite—as shown with a giant Tina onstage at NYCC in place of actor Dan Mintz, who voices her—but people are showing their love for the rest of the family. And while Bob’s restaurant may not be as successful as the show, try as he may, everyone else is feeling the love.

“I am used to blank stares when somebody asks me what I do or what I work on,” Bouchard said. “I tell them my whole career has been mostly just telling people that and they nod and smile. And that’s fine and I never wanted to be any other way, but it is different now. Bob’s has penetrated in a way where more often than not, if I tell somebody what I work on, they light up, and it’s really nice.”