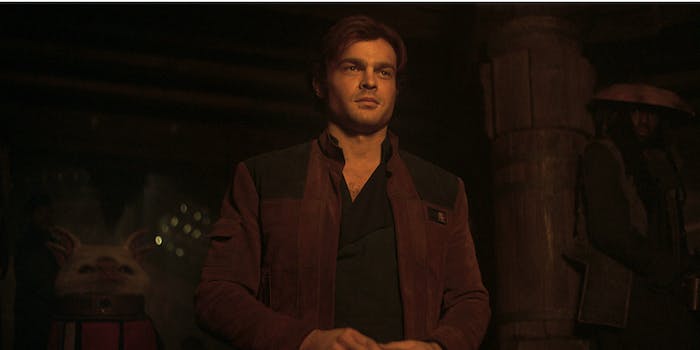 Disney CEO admits he overdid it with ‘Star Wars’ reboots

'I think the mistake that I made—I take the blame—was a little too much, too fast.'

Since Disney’s purchase of Lucasfilm in 2012, we’ve seen a Star Wars resurgence on a massive scale between the films and TV shows (with several more of each in varying states of production). But after Solo’s disappointing box office run over the summer, Disney has acknowledged that maybe it went a little overboard with the amount of Star Wars it gave us.

In a wide-ranging interview with the Hollywood Reporter, Disney CEO Bob Iger addressed the idea that there’s an excess of Star Wars movies being released. To date, Disney has released four Star Wars film in under three years with at least one more film in production. (It also has Star Wars Resistance, which will air next month.)

According to Iger, Disney still wants to bring fantastic Star Wars stories to the big screen, but it may slow things down a bit.

“I made the timing decision, and as I look back, I think the mistake that I made—I take the blame—was a little too much, too fast,” he explained. “You can expect some slowdown, but that doesn’t mean we’re not gonna make films. J.J. [Abrams] is busy making [Episode] IX. We have creative entities, including [Game of Thrones creators David] Benioff and [D.B.] Weiss, who are developing sagas of their own, which we haven’t been specific about. And we are just at the point where we’re gonna start making decisions about what comes next after J.J.’s. But I think we’re gonna be a little bit more careful about volume and timing. And the buck stops here on that.”

Iger’s statement doesn’t necessarily throw any of the previous Star Wars films under the bus. Despite Solo’s box office performance, it still received largely positive reviews, and despite all of the controversy that The Last Jedi sparked, it still made more than $1 billion at the box office and was praised by critics. He just puts more of the blame on the bloat of Star Wars movies and the potential fatigue it caused on himself, which probably won’t change the minds of the fans who have pinned Star Wars’ failings on Lucasfilm or its creators.

After Episode IX’s release in 2019, Disney and Lucasfilm have been mum on what’s coming next, although it’s working on movies from Rian Johnson and Game of Thrones showrunners David Benioff and D.B. Weiss, a live-action TV show from Jon Favreau, and a revival of Star Wars: The Clone Wars is in the works. And while we don’t know what will happen to the rumored standalone movies starring Obi-Wan Kenobi or Boba Fett, we just might have to wait longer than we once anticipated to see more of these stories pop onto the big screen.