13 great board games for your next date night

The couple that plays together stays together, right? But when you’ve had enough of screaming at each other over Mario Kart matches, maybe it’s time to set the controllers down and pick up some analog entertainment.

That said, not all board games are created equal: While many will begrudgingly accommodate two players, it’s rare to find an intentional, well-designed game for two people. Some of our favorites, in fact, claim to support two players, but the mechanics of the game fall flat when you’re only bouncing back and forth between turns. (Sorry, Kristen Bell and Dax Shepard: Catan is great, but better with three or four.) Conversely, games for two people don’t have to be restricted to the childhood classics of Battleship, Guess Who, and War.

Here are a few suggestions for board games for two so you can keep enjoying date nights in without devolving into another debate about Netflix watchlists.

The best board games for couples

At first glance, Jaipur is a deceptively simple game about commerce: buying, selling, and trading diamonds, leather, spices, gold, silver, and cloth. But its rapid-fire rounds belie the deeper strategies at play here. Do you take all the camels for later swapping power, or swap some of your commodities? Decide quickly, because the going rate for the goods at the market diminishes the more are sold.

The game’s built-in mode is a “best of three” round, but you could easily ignore the Seals of Excellence and just keep playing for hours. Nobody likes Scrabble. I get it. But the makers of Paperback found a way to make a word-centric game fun again with the added mechanic of a deck-builder like Dominion. Earn pennies for your lexicographical creations, then use that buying power to pull a Pat Sajak and buy a vowel (or a consonant, or a two-letter combo card) for later use. With enough buying power, you can also snag one of the wild card books on offer, building your “fame points” for the ultimate victory.

As an added bonus, the game includes a half dozen variations already built into the rule book, so you can experiment to find the best fit for your players. Here’s creator Tim Fowers explaining the gameplay with a prototype version of the deck.

Though it supports up to five players, most people agree that Carcassonne is best as a duet, with two people duking it out to claim the most roads, cities, and farmland in an ever-expanding tile city.

Once you get the hang of it, there are plenty of expansions available to help keep things fresh, including Inns & Cathedrals, Rivers, and more. (They complicate the scoring, but the mechanics are largely the same.) As the box eloquently puts it, “you win by getting a head.” You play an executioner in Revolution-era France, trying to please the people by beheading the least popular nobles. But action cards keep shuffling up the front of the line, making it difficult to predict who’s next on the chopping block. While in game time, this plays out over three days, you’ll be able to knock out a round in about half an hour.

All the relaxation of a Zen sewing hobby, none of the hazards of needles and sewing machines. Each player is trying to make the most complete 9×9 quilt using an array of Tetris-esque pieces, available for purchase with buttons that you earn over time. But the bigger the piece you play, the more quickly your token advances through the time track, effectively giving you fewer turns to pick up more patches. It’s rare to find a game that rewards the resistance to rush, and it’s fitting that a quilting game would be such an exercise.

6) Agricola: All Creatures Big and Small

Can you build the biggest farm with the most animals in eight rounds? This intentionally two-person variant of Agricola will reveal your hidden animal husbandry skills as you try to foster a variety of cows, horses, pigs, and sheep. It removes the more complicated parts of the original game, opting to focus solely on the animals instead—and includes adorable animal tokens to boot.

As students at a prestigious Japanese painting school, players face the age-old decision of staying to learn more or forging their own path. Paint an ever-expanding canvas or opt to expand your studio in order to develop skills and media for future turns. Of course, there are diplomas to earn along the way for painting specific combinations of seasons and subjects, and the player with the most points at the end wins. The bamboo play mat and beautiful watercolor art are both really nice touches in this loosely competitive game with a very Zen feel. 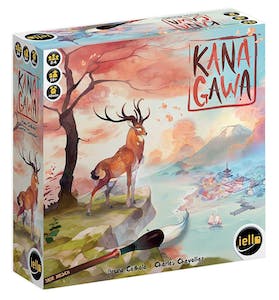 It’s like someone took Studio Ghibli cuteness and turned it into a board game. Over the course of three rounds of play (one for spring, summer, and fall) players grow their trees by placing branch cards from their starting trunk. You can earn points for the most number of consecutive branch cards with like features—stars, caterpillars, clouds, fireflies, flowers, and mushrooms—or by pleasing the tree spirits as outlined on Kodama cards. If you have the urge to garden and none of the inclination to be covered in dirt, this is the game for you. Just be sure you start with a clean playing space; these trees can get pretty big.

Take turns drawing cards, playing trains along short routes, or selecting new destination objectives. You earn points for each train played—more for longer routes—and for each destination objective, you’re able to achieve. Simple, right? Just wait until your opponent blocks your way in to a destination city and you’re forced to find an elaborate way around over the subsequent three or four turns. There’s plenty of strategy to experiment with here: Do you save up cards and play trains all at once or slowly build out intracity connectors as soon as you’re able? Do you opt for picking up more lower-point-value objective cards or go all in with a couple cross-country routes? The game will be a little different each time you play it, and thanks to a balance between strategy and chance, hopefully fairly evenly matched as well. Hive makes almost every version of this list on the internet, thanks in no small part to its eye-catching design and elegantly simplistic rules. Like chess, it’s black vs. white in a battle of the queens, but unlike chess or its grade-school cousin checkers, Hive can be played anywhere flat. Each insect tile has a different mode of play, and you have to use some sneaky strategy to surround the other player’s queen with your tiles before they can do the same to yours. With play sessions coming in at just 20 minutes, you’ll have ample opportunity to learn from your mistakes and tighten up your strategy for the next go-round. It’s like miniature chess! Except not at all. In Onitama, each player starts with five pawns on a five-by-five board. But the moves you can make, rather than being dictated by the type of piece, are chosen from a small set of cards in your hand. First player to take the other’s main pawn—or to reach that pawn’s starting space—wins. With randomized starting positions, the game’s replayability is almost endless, and the board games subreddit also praised Onitama’s “fantastic component quality [and] fun flavor text on the move cards.” If you’ve played the traditional 7 Wonders, you might be wondering how the passing of hands of cards would work in a two-player variant. Rest assured: That mechanic is replaced in Duel with an array of face-up and face-down cards between the players. Careful strategy with military and science cards can win you the game, as can the usual path to the most number of points. Can you reach your opponent’s capital to win the game before they achieve dominance in one of the other fields? While many gamers would recommend Lost Cities, a few BoardGameGeeks users got frustrated by the amount of play that’s left to chance and pick Morels instead. This game is exactly what it sounds like: foraging, cooking, and selling mushrooms. There’s a daytime and nighttime deck, different values for different fungi, and an important strategic balance to strike. While cooking can earn you more points, selling can afford you better options for your next trip into the forest—and you have to stick to a strict hand limit all the while. Editor’s note: This article will be regularly updated for relevance.