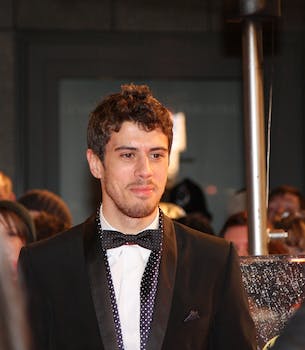 Well, this was unexpected.

According to one of the stars of the Fantastic Four reboot, the movie version of Victor Von Doom is a blogger. Also, his name is no longer Victor Von Doom.

In an interview with Collider, actor Toby Kebbell gave fans the first description of his portrayal of the iconic Marvel supervillain.

“He’s Victor Domashev, not Victor Von Doom in our story,” Kebbell said. “And I’m sure I’ll be sent to jail for telling you that. The Doom in ours—I’m a programmer. Very antisocial programmer. And on blogging sites I’m ‘Doom.’” Kebbell went on to describe director Josh Trank’s filmmaking style as “lo-fi” and “ultra-real.”

Comic book fans are notoriously judgemental about how their favorite characters are transferred from page to screen. Most of the time, writers make changes to update characters for mainstream audiences or to give them more meaningful roles (for example, Jane Foster’s transformation from nurse to astrophysicist in the Thor movies). But this new reimagining of Doctor Doom is a bit of a head-scratcher.

In the comics, Doctor Doom is a power-hungry genius who rules the fictional European country of Latveria. He wears a metal mask and a cape pretty much all the time, and tends to refer to himself in the third person during his many melodramatic supervillain monologues. The idea of Doctor Doom as a computer programmer and blogger is so bizarre that it sounds like a joke from Clark Kent parody Twitter account @CK1blogs.

Dr. Doom is a blogger now in the Fantastic Four movie, which means it’s a matter of time before @CK1Blogs becomes canon in BvS.

This isn’t the first time the new Fantastic Four reboot has departed from comics canon, but it’s certainly the weirdest. The main cast are all in their late twenties or early thirties, with Kebbell the oldest at 32. Reed Richards, canonically the oldest character in the team, is being played by 27-year-old Miles Teller. The reboot also cast African American actor Michael B. Jordan as the Human Torch, but the only people who really perceived this as a controversial decision were racists. The transformation of Doctor Doom from Latverian monarch to antisocial computer programmer has inspired far more bafflement and disgust among fans.

Dr. Doom in the new FF movie isn’t Victor Von Doom but a blogger called Doom. This is why @Marvel and everyone hates you, @20thcenturyfox

The main thing to take into account about this Doctor Doom news is that it’s coming from just one interview. Doom’s name change and new identity as a “blogger” set off alarm bells for many fans, but Kebbell’s answer could have been poorly worded. Since this version of the character is potentially decades younger than the Doctor Doom we know from the comics, the actor’s description could just refer to Doom’s life before he reached full supervillain status. If this movie is as gritty and “lo-fi” as Kebbell suggests, it might be jarring to have a character introduce himself with a cartoonish name like Viktor Von Doom.

Since Doctor Doom is a well-established character who will be familiar to many fans (including people who saw the 2005 Fantastic Four movie), we can probably expect some kind of clarification from Kebbell or the filmmakers. Otherwise, The Fantastic Four comes out in August 2015, at which point everyone can have a fully-informed argument about whether this version of Doctor Doom is a travesty or just a realistic update of the character.