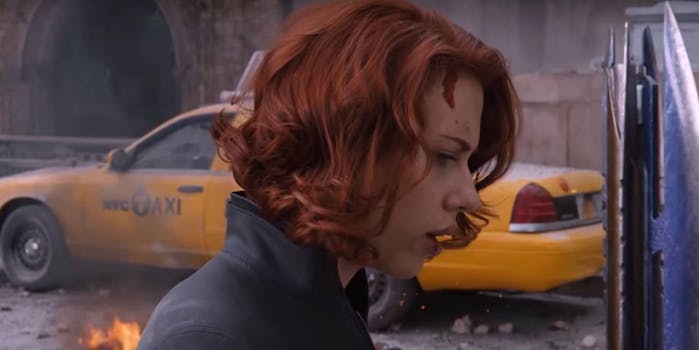 One step closer to giving the people what they want.

It may be some time before Marvel fans get to see Black Widow star in her own film, but Marvel Studios President Kevin Feige has at least committed to the idea.

In an interview with Deadline on Friday, Feige stressed that a good nine to 10 Marvel films have already been spoken for but that the former S.H.I.E.L.D agent deserves not just her own movie, but an entire franchise behind it.

“The one [character] creatively and emotionally that we are most committing to doing [a movie on] is Black Widow,” Feige said. “We think she’s an amazing character. We think Scarlett Johansson’s portrayal of her is amazing. She’s a lead Avenger and has amazing stories in her own right to tell that we think would be fun to turn into a standalone franchise.”

Feige’s words don’t exactly suggest that a Black Widow film is one of Marvel’s top priorities, but they’re a step in the right direction, especially given that fans have clamored to see more of her.

On Twitter, people weighed in with a mixture of excitement and exasperation, because, well, finally.

OUR PRAYERS HAVE BEEN ANSWERED!!! #blackwidow https://t.co/TwAq05NLwM

Word going around is that #BlackWidow will get a solo film. PLEASE let this be true. She deserves one. @Marvel pic.twitter.com/NHiVqJqi5M

Cmaaaaaan how can u not give her a solo movie?! #BlackWidow pic.twitter.com/4cEqyKfyP8

Feige didn’t say anything else about the idea of a Black Widow film, including whether concrete plans for one were in the works.

If the buzz around even the faintest hint of Black Widow movie news is any indication, Marvel will be celebrating a similar success once her movie hits the big screen.