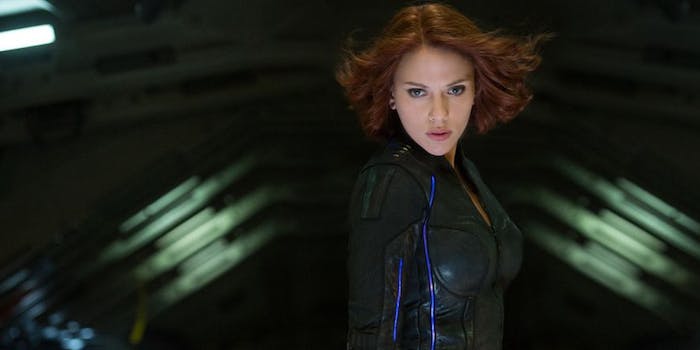 Despite what IMDb might lead you to believe, there’s still no Black Widow movie on the horizon.

In the five years since Scarlett Johansson first showed up in Iron Man 2, the fan campaign for a Black Widow solo spinoff has evolved into the modern equivalent of Firefly cancellation backlash. People are vocally frustrated by Marvel‘s focus on male heroes like Ant-Man over a Black Widow movie, a problem exacerbated by the mysterious absence of Black Widow merchandise.

Black Widow fan Kristin Rielly decided to take things up a notch this weekend, organizing a worldwide flash mob event to campaign for a Black Widow movie. Appearing in costume and holding signs with the hashtag #WeWantWidow, fans plotted in secret to coordinate the event.

#WeWantWidow @Disney YOOHOO! Can you hear us? Or are the princesses holding their little hands over your ears? pic.twitter.com/HH28TEyYfz

“Executives empowered with making decisions probably don’t care about our desires – as fans or as females. But it’s shocking that they don’t seem to care about our dollars. Our dollars should be their incentive, and perhaps some visualization of that potential for them – through images and text that goes viral and gains news coverage – should speak to them in a way that accomplishes something beneficial to everyone with a stake in these stories.”

#wewantwidow cause this was the only toy we could find of her in our local comic book shop today, we need lots more pic.twitter.com/8YpE0kkSmu

#WeWantWidow is a great campaign! I want more WOC superheroes in movies and merchandise too!! Equal representation for ALL women!

Every few months, someone in the upper echelons of the Marvel Studios creative machine will mention the possibility of a Black Widow movie. It’s definitely been “discussed” with Johansson (who seems enthusiastic about the role), and Marvel is aware of the huge fan response such a movie would inspire. But for reasons beyond fandom’s control, a Black Widow solo spinoff still may never happen.

Hopefully campaigns like this one will make Marvel Studios see sense, but we aren’t holding our breath.