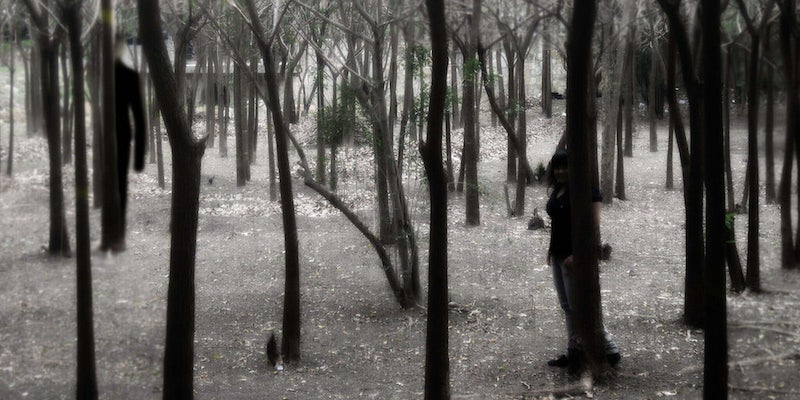 If you like being terrified, this horror documentary series is definitely the podcast for you.

If you’re searching for something scary to get you into the Halloween spirit, it’s time to start listening to The Black Tapes Podcast. Framed as a Serial-esque series hosted by reporter Alex Reagan, it feels like what might happen if a perky NPR journalist decided to investigate the Blair Witch Project.

The Black Tapes Podcast was originally billed as a profile of paranormal investigator Richard Strand, a character partly inspired by the real-life skeptic James Randi. But things take a turn for the disturbing when Reagan discovers Strand’s file of unsolved cases, the so-called Black Tapes. Despite his best efforts, Strand hasn’t been able to find a scientific explanation for this unsettling collection of seemingly supernatural events.

As Reagan begins to investigate these cases herself, her interviews with witnesses and academic experts feel so realistic that some listeners fail to realize that the podcast is a work of fiction. In the vein of the icon of audio drama Orson Welles’ The War of the Worlds, the best kind of horror story is one that you can almost believe is true.

The podcast borrows much of its inspiration from “real” paranormal events and artifacts, from the urban legend Slender Man to medieval Satanic mythology. Some of these details will undoubtedly be familiar to horror fans, but the documentary format and creepy atmosphere are more than enough to make Black Tapes frighteningly addictive.

In an email interview, we spoke with creators Paul Bae and Terry Miles. In order keep the mystery alive, they never admit that The Black Tapes Podcast is anything less than real.

Before the podcast began, did you have a personal interest in the paranormal? Have the Black Tapes changed your attitude as the story progressed?

Paul Bae: I’ve loved ghost stories since I was a child. I don’t know if I believe in them, though. I tend to side more with Dr. Strand’s skepticism. Terry and I love the horror genre and were raised on a diet of them.

Terry Miles: I would love to actually see a ghost. Wouldn’t that be amazing? To have concrete evidence of something else? But right now, yeah, we both try to stay open-minded about everything as this investigation grows.

Do you think you’ll stick with the paranormal theme once Alex has wrapped up her investigation into Strand and the Black Tapes, or will you move onto a different topic?

PB and TM: Our channel, Pacific Northwest Stories, is dedicated to telling various stories that are immersive and chilling. We are presently producing other shows while beginning production of season 2 of The Black Tapes. So once Alex solves the mystery of Strand’s tapes, she will move on to other things, we think. But that’s really Alex’s call.

Like Serial, your podcast has a growing online following, with people trying to help solve the mysteries on sites like Reddit. What kind of messages have you received from fans so far?

PB and TM: We receive people’s submissions or “paranormal reports” at Dr. Strand’s site. And we’ve received hundreds of them. Everything from glowing orbs and mysterious apparitions to even just a vague sense of being watched all their lives. For some, it’s a comfort. For others, it’s completely terrifying. We’ve barely had time to go through them, but we’ve been trying to parcel out a few hours to go over some of them that we’d like Dr. Strand to respond to.

We also receive messages from people wanting to us to prove the veracity of certain things from the show, like the location of a building mentioned or even a photograph of [Black Tapes character] Sebastien, which of course we can’t publish without his parents’ consent.

In one episode you play the “Unsound,” a noise that is reputed to cause the death of anyone who hears it. Are you worried about liability in cases like this? Plenty of people seem to believe in urban legends like the Unsound, but as Strand frequently points out, there’s no direct proof anyone is in danger from supernatural forces.

PB and TM: Well, we do have the disclaimer in the episode. And when we play it the second time later in that same episode, it’s not actually the Unsound but a synthesized version mixed by Nic. We felt like we had to include what it sounded like for our listeners without subjecting them to “the curse” of the Unsound. Just in case. But we’ve received several messages and tweets from people saying they had to skip the Unsound part, despite their skepticism.