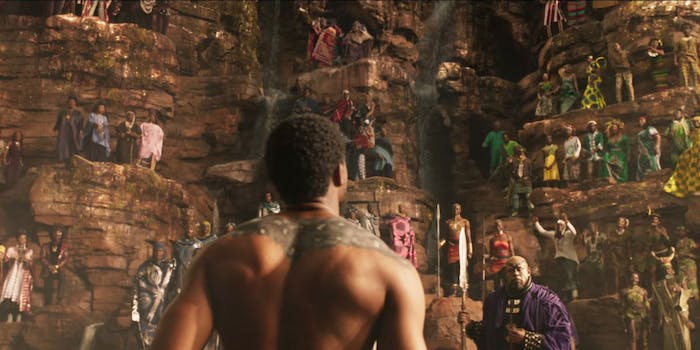 More than two weeks after Hollywood wore “royal attire” to the Black Panther world premiere, fan finally got to see the movie Thursday night and celebrated with a mix of cosplay and African-inspired outfits of their own.

While Marvel always has strong showings at the movies, the launch of Black Panther—the first Marvel Cinematic Universe film centering around a black superhero—was an event. And fans who saw the movie—some who were finally seeing themselves reflected on-screen for the first time—marked the occasion in style.

Some fans used the hashtag #WakandaCameToSlay, which was created by culture critic Tora Shae, to share their outfits and see what else people wore.

👀 A buncha yall went to see #BlackPanther & I know y'all showin out!
Lemme see some lewks!!

When Wakanda Calls, and you answer. I've been waiting for this moment since I saw my first X-Men cartoon at 8 years old. #BlackPanther #WakandaCameToSlay pic.twitter.com/5ShpH0lBiz

They wore T-shirts that celebrated Black Panther and Wakanda, wore traditional dresses, shirts, and pants that paid tribute to their heritage, and dressed up like King T’Challa, Princess Shuri, and the Dora Milaje.

People were NOT playing about #BlackPanther at all lol pic.twitter.com/7dLFS3sYje

#WhatBlackPantherMeansToMe being able to see a princess that LOOKS like me and is smart, strong, brave, pretty and silly like me. Can’t wait to share this movie with #FlintKids #blackpanther #WakandaForever pic.twitter.com/q1v3setVOH

Ghana showed out for #blackpanther pic.twitter.com/n7413W1rEs

my older cousin and his wife were NOT playing 😂 #BlackPanther pic.twitter.com/gCvUvwkETQ

One fan took inspiration from Coming to America’s royal family for his Black Panther premiere cosplay.

Black Panther made an estimated $25 million Thursday night with predictions that its opening weekend will be historic. And now that it’s out, fans will be prepared to see it again and again.

Every. Single. Theater. Is. #BlackPanther 👏🏻👏🏻👏🏻 pic.twitter.com/hrkgjE2It3