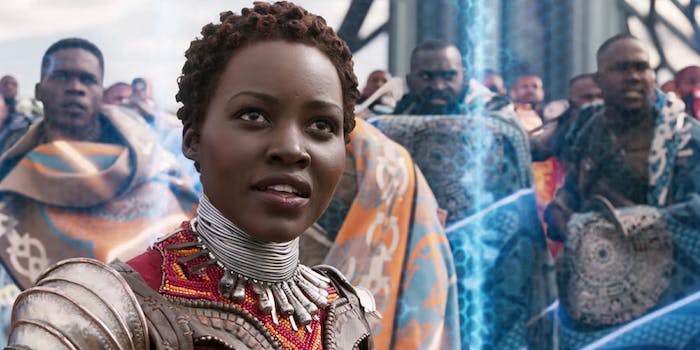 It's a Marvel first.

Many of Disney’s recent films have dominated the box office and received critical acclaim, but this year Disney’s Marvel Studios are attempting something that’s never been done: Get a superhero movie—namely, Black Panther—a best picture Oscar.

A new report from the Los Angeles Times reveals that Disney is launching an Oscar campaign for Black Panther, which will come with a “significant awards season budget” from Marvel Studios. It’s a first for Marvel Studios, which has received Oscar nominations for several films (in technical categories) over the last few years but has yet to win a single award. Black Panther, whose Oscar buzz began not long after the film’s release in February, could change that.

Other Oscar campaign consultants have highlighted that Black Panther, on top of being a great film, is a worldwide cultural phenomenon. The challenge is translating what it meant to audiences into an award angle that could work in Black Panther’s favor.

“I would like to see the hard work and the effort and the vision and the belief of the talented filmmaker Ryan Coogler, who sat across the table from us a few years ago and said, ‘I have been wrestling with questions about my past and my heritage and I think I really want to tell a story within this movie,’” Marvel Studios President Kevin Feige told the Los Angeles Times. “And that he did it so unbelievably well and with so much impact … seeing that potentially being recognized is what excites me the most.”

While the Oscar campaign was in the works for some time, the Academy’s recent decision to add an award for “outstanding achievement in popular film” to the 2019 Academy Awards was largely seen by some critics as an attempt to give mainstream films like Black Panther its own category so that smaller, artsy films would still be able to win best picture. (The Academy clarified that competing films would be eligible for both popular film and best picture categories.)

But the new category hasn’t deterred Disney from launching an Oscar campaign. It’s likely the film will pick up nominations for other categories like original song, costuming, cinematography, and hair and makeup on top of the popular film category, which could make the pathway to a best picture nomination possible. According to Feige, he’d be thrilled for anyone in front of or behind the camera to be recognized.