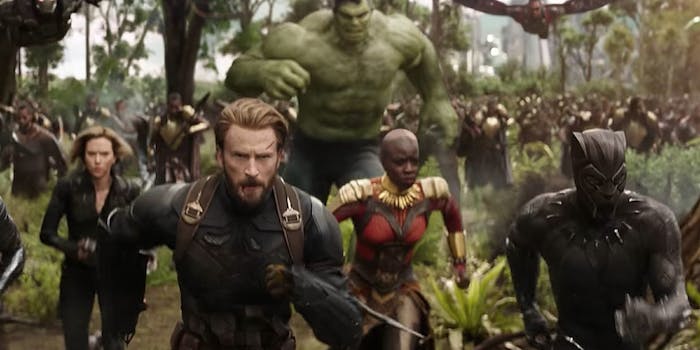 All the ‘Black Panther’ characters in ‘Avengers: Infinity War’

If you’re still riding the high of Black Panther (and who isn’t?), we have good news: Marvel will return to Wakanda soon enough, with T’Challa and his allies appearing in Avengers: Infinity War.

This won’t be news to anyone who watched the Infinity War trailers, but even diehard fans may not realize how many Black Panther characters are in the movie. It’s definitely more than just T’Challa and General Okoye because the film includes an extended sequence in Wakanda. Judging by the trailer, Captain America and Bucky Barnes join T’Challa’s army for a battle outside the Golden City.

Shuri will also return, giving Letitia Wright another chance to outshine anyone who shares her scenes. As per Black Panther‘s final post-credits scene, she has something to do with Bucky’s recovery in Wakanda. She’s joined by her mother Ramonda (Angela Bassett), although Nakia (Lupita Nyong’o) and W’Kabi (Daniel Kaluuya) are nowhere to be seen. Florence Kasumba reprises her role as Ayo, the Dora Milaje guard who accompanied T’Challa in Captain America: Civil War.

M'BAKU WAS IN THE INFINITY WAR TRAILER OMG pic.twitter.com/2EWsMBSsCU

After Black Panther, a lot of fans were excited to notice M’Baku in the Infinity War trailer. He was a pretty obscure character before last week, but Winston Duke’s performance made him an instant favorite. It’s hard to imagine him having a major role in Infinity War‘s cast of thousands, but he’ll definitely appear alongside some other Jabari warriors. This may give us an update on the political state of Wakanda, where the Jabari just formed their first alliance in generations with the Black Panther king.

Infinity War comes out on May 4.