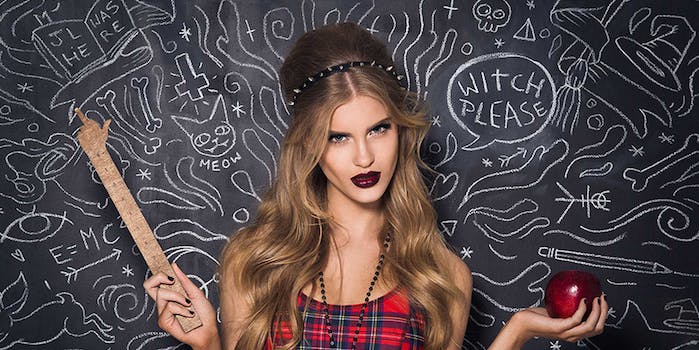 The brand that was supposed to defend geek girls just eluded them completely.

Being a geek girl isn’t easy when you’re constantly dealing with sexism, harassment, and “fake geek girl” accusations at every turn. So when you find a company that supports geek girls and encourages you to express your nerdy nature, you start to look at them as a positive example of what you’d like to see more of in geek culture. Unfortunately for many women who looked to online fandom fashion retailer Black Milk Clothing as this example, the company’s positive image was shattered when on Star Wars Day the company shared a rather disconcerting meme on Facebook.

The meme was a twist on the “Expectation vs. Reality” concept which usually shares an actual—and disappointing—outcome next to the desired one. Here actress Mayim Bialik’s character from The Big Bang Theory was presented next to a sexy model in a R2-D2 dress, implying that Bialik’s look was the undesirable choice. 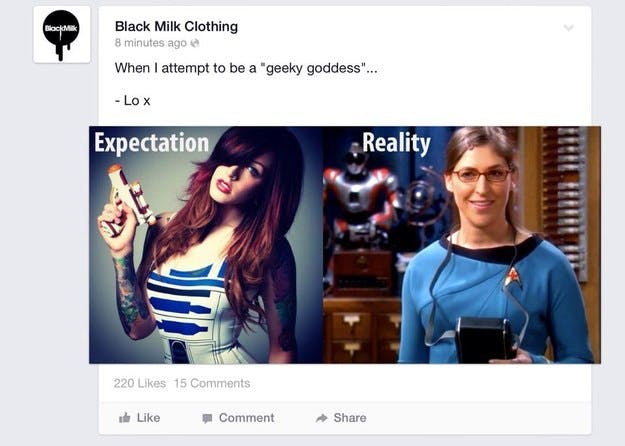 The post offended many of the company’s fans who saw this as sharing a sexist message and in violation of two of the brand’s own Facebook commandments stating people should be excellent to each other and not make critical comments about other women’s bodies.

While sharing the meme was poor judgement on the part of the Black Milk team member who might not have understood how it would come across, it was really the company’s response to those who felt offended that made the situation worse. Those who shared their distaste for the meme had their comments deleted and some were banned from the page. Black Milk also answered comments with a poor attitude, telling those who felt insulted they should just leave the page and never purchase their products again. 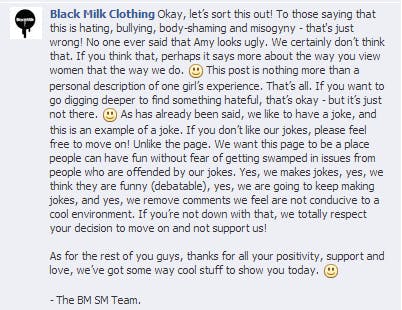 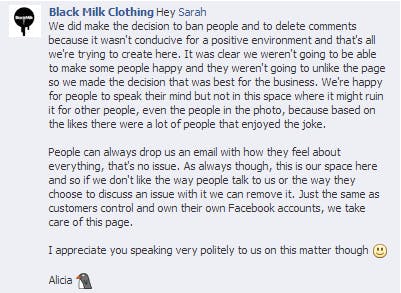 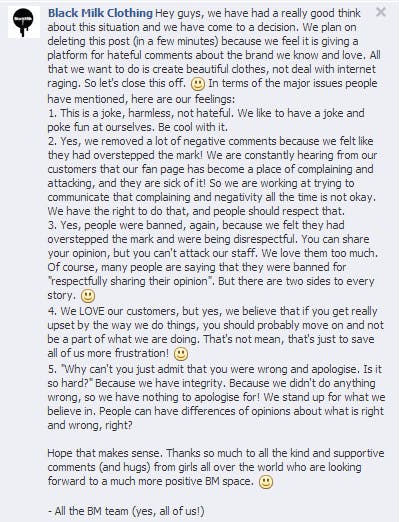 Their first response should have been an apology. Instead, it sounded more like Black Milk was telling fans they didn’t matter and to get over themselves. Clearly it mattered to many geeks though, who shared the news on social media and even wrote a BuzzFeed Community post creating a PR disaster for the company. Soon the meme was deleted and head of marketing Cameron Parker posted what many agree is a thoughtful apology. However it came two days too late.

While it’s definitely disappointing to see companies fail at social media or misunderstand the needs of their customers (just look at the situation with Nintendo this week for another example), what makes things worse for Black Milk is that until this, the company was seen as one that empowered fangirls. For a long time they were one of the only places women could find geek-themed fashion items, especially unique ones like leggings.

The meme and the response felt like a betrayal to many women who looked to the brand as a supporter of geek girls. Despite the positive response to Parker’s apology, the fact that his team handled things so poorly to begin with has led many to question whether the company believes in the very message of empowerment and acceptance they have been spreading. Such a poor social media move is especially harmful to Black Milk since they are an online retailer who entirely depends on their social media to reach customers. Alex Caton, Black Milk’s social media coordinator, told the Daily Dot in a November interview that connecting with consumers online is the most important thing for the company and that they try to “form genuine relationships.” Caton also said they consider community feedback, which makes this situation all the more contradictory.

By not being open to criticism of a meme they decided to post, how can consumers believe they will listen to product feedback? By deleting comments and banning people they are fostering a closed, exclusive community instead of the positive, open one they claim to support. It’s also led to many new stories of their poor service being exposed, including one from Geek & Sundry geek fashion vlogger and Console to Closet blogger Amanda McGinnis. Many are also pointing to the Tumblr titled The Truth about Black Milk Clothing for examples of a history of poor service and community management. This could not come at a worse time for Black Milk, which has recently completed a licensing deal with Disney. It’s hard to imagine Disney not noticing the backlash from this incident.

Since Tuesday, Black Milk’s been quite cautious over social media. On Facebook they stopped signing their posts to let fans know who’s managing the page and responding to comments, and they’ve been answering reports of poor customer service right away. Parker has been responding to many of the complaints, including one Friday claiming to have heard an employee call fans pathetic.

Black Milk still has it’s loyal customers despite this though, and they were out defending the brand on social media as well.

Considering the fanbase Black Milk has built over the years and the fact that it is one of the only companies offering stylish geek-inspired items for women, this incident most likely won’t destroy their brand. However it’s landed a blow to their credibility and it will probably take some time, and a lot of work, before they can make up for it among geek girls.