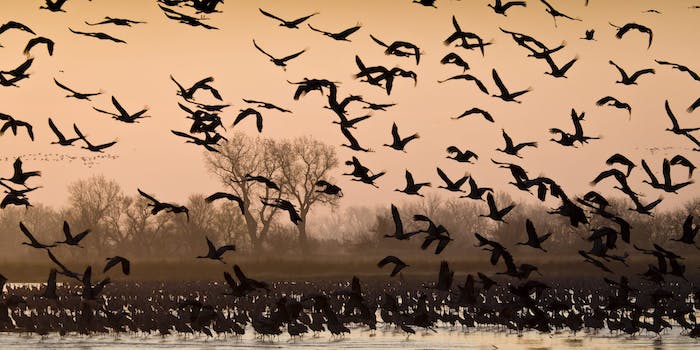 Gaze upon 118 bird migrations in one mesmerizing GIF

Researchers crowdsourced observations from birders to make it.

Where do birds go when they migrate south for the winter? It’s harder to figure out than you might think.

According to Frank La Sorte, an ornithologist at Cornell University, tracking birds is quite challenging.

“Birds are difficult to track in general,” La Sorte told the Daily Dot. “There’s a couple of reasons for that. They travel great distances, migrate at night, and in high altitudes.”

Researchers often track migrating animals by fitting them with devices that use satellites or radio signals to tell the scientists where they are. But that only tells you about the individual animal, and can be misleading when researchers want to track a whole population of a species of animal, La Sorte said. Individuals may take different routes to eat more food, get eaten by a predator, or simply take a wrong turn somewhere and fly off course.

So La Sorte and his team turned to an online database called eBird where birdwatchers across the globe go to log their observations. The result? An open access paper in the Proceedings of the Royal Society: B and this totally fascinating GIF:

The GIF shows the migration route of 118 different species native to the Americas, the dynamic patterns they take and how long they spend in their breeding grounds in the spring, and how long they stay at their southern homes in the winter.

“There’s a tremendous amount of variation that you can’t represent in a static map,” La Sorte said.

For example, birds that breed in northern climates don’t hang out for too long before the weather starts to turn and they have to fly back down south. Birds that breed in the southern latitudes will stay longer.

The routes the birds take also vary from species to species and through the seasons. According to La Sorte, wind conditions play a major role in how birds will plot their routes. They favor low-wind or tailwind conditions that will keep them from getting blown off course. Those winds change throughout the year, leading some birds to cross parts of the Atlantic and the Gulf of Mexico.

But in the western coast of the Americas, birds generally don’t fly over the Pacific Ocean. La Sorte said that’s probably because winds tend to blow west over the Pacific, and those winds could potentially carry the birds far out to sea.

La Sorte said he and his team could never have performed such a detailed analysis without the help of thousands of volunteers on the Internet.

Researchers at Cornell started eBird in 2002 as a way for birdwatchers to become citizen scientists. At the website, they upload their observations of the species of bird they saw as well as where and when they saw it. The data are then passed through some automatic filters that flag obvious outliers—such as an albatross in Kansas—and then the data are reviewed by regional experts. These experts are ornithologists who volunteer their time to comb through the data to determine the validity of each observation.

La Sorte said eBird was initially a little slow to get going, but now is quite popular among U.S.-based birdwatchers. He said that several other countries in Europe as well as Australia have their own versions of eBird, which are slowly getting incorporated into one massive database.

The data are helping researchers answer important questions that contribute to the conserving bird species.

“With birds, if you want to ask questions related to conservation, you really need to understand where they occur throughout the entire year,” La Sorte said. He explained there’s tons of data about where and when they breed, but birds spend even more of their lives migrating and overwintering. He said less is known about these parts of their lives mainly because ornithologists are few in number and often based in the U.S., where resources are limited to fund field trips to follow birds.

eBird also offers incentives for birdwatchers to contribute their data. They can track their own data and compete with other users in monthly contests. Users who submit the most data each month can win prizes like new binoculars.

Since birds are important predators of insects, losing them could easily throw the food chain out of balance, La Sorte said. But with the help of citizen scientists on eBird, researchers can propose new policies that can help protect birds throughout their lives so they can continue to flourish.

Photo by Larry Crist/Wikimedia (CC BY 2.0)