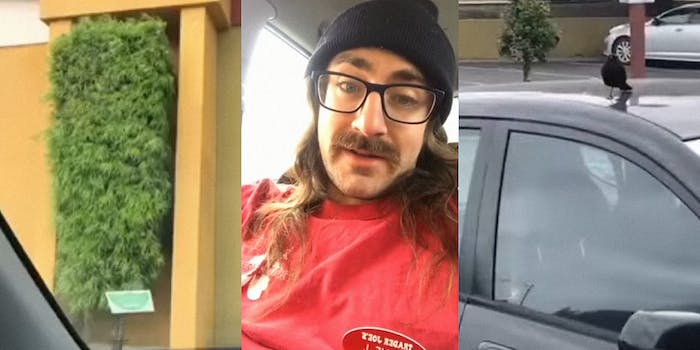 Man tries to demonstrate how a bird protects its nest, ends up getting attacked

What better way to demonstrate how a bird defends its nest than by letting it attack you?

Everyone knows that a bird defending its nest can be a terrifying thing. Or a hilarious thing, depending on your point of view. A Trader Joe’s employee named Steve was trying to demonstrate one, or possibly both of these things, when he set up shop across from a bush that he knew contained a nest.

Trader Steve, as he’s known on YouTube, claims he parks in the same spot every day, apparently to watch the hijinks of what appears to be a crow, guarding its nest from high atop a nearby CVS.

It’s the only video on his channel, so it seems like Trader Steve must have been super excited to share a video of this bird going, as he refers to it “ape-shit” on unsuspecting passersby. Unfortunately for Steve no one is walking by at this particular time of day, and perhaps in a hurry to get back from his lunch break, he sees no choice but to offer himself as “tribute”.

The bird seems to sense what Steve is up to, as it decides to fly down, land on his car, and stare directly at him.

Which, inevitably, leads to this choice moment.

Way to take one for the team, in the name of science, Trader Steve.

Check out the full video below.