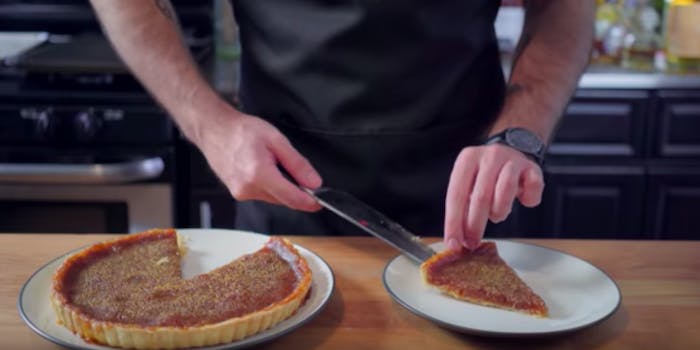 Learn to make Harry Potter favorites with Binging with Babish

YouTuber Andrew Rea of the popular food channel Binging with Babish shows us how to make three Harry Potter-inspired British dishes in celebration of his upcoming book release, Eat What You Watch. And, just in time for the holidays.

Binging with Babish is cooking channel on YouTube that remakes fictional dishes from popular TV shows and movies like Curb Your Enthusiasm and The Chronicles of Narnia. Rea starts his Harry Potter video with pumpkin pasties, followed by his best take on Harry’s favorite dessert, a treacle tart, before ending with his own spin on the series most popular drink, Butterbeer.

His techniques are easy enough to follow along for those familiar with baking and the dishes don’t require expensive or unusual ingredients. The treacle tart is especially timely with Thanksgiving right around the corner. Any of them would fit in perfectly with a Thanksgiving or Christmas Day spread.

Some Europeans did critique Rea’s American take on pasties, a usually savory dish.

But, Rea doesn’t disappoint when it comes to making the delicious treats.With Harry Potter having seven books—and tons of food mentioned during the gang’s tenure at the wizarding school—hopefully, Rea has more recipes planned.