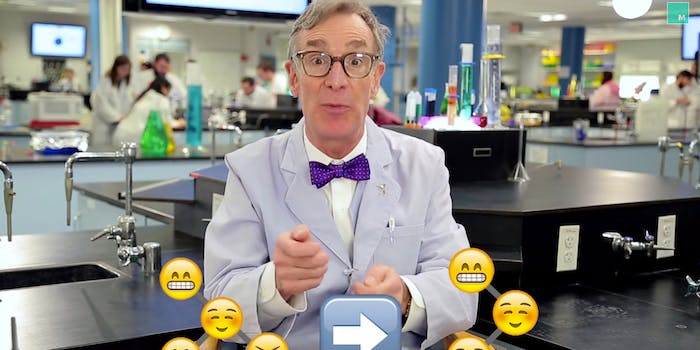 Let Bill Nye explain evolution to you using only emoji

Apparently, we all evolved from from smiley faces.

Can a cute little emoticon help you understand how molecules interact and reproduce? Absolutely—as long as Bill Nye is the one explaining the process.

Nye, the famed science communicator whose TV show Bill Nye the Science Guy ran from 1993-1998, joined Mashable to illustrate the science behind evolution using only emoji. Technically, he also relied on the natural charm that comes from being one of America’s most beloved scientists.

Nye was helping to promote General Electric’s new Emoji Science lab, which popped up last week in New York. Nye was one of several celebrities including Rosario Dawson who stopped by and filmed videos and Snapchat science experiments as part of the project. GE also made an emoji experiment website featuring a host of cool science experiments corresponding to various emoji.

In his brief video, Nye used emoji to explain the basics of molecular evolution: divergence, mutation, reproduction, and a whole lot of time to build the universe.

Of course, this process looks a lot cuter when he explains it.

Update: Here’s Nye’s video promoting the GE Emoji table of experiments website, along with a few more guests you might recognize: