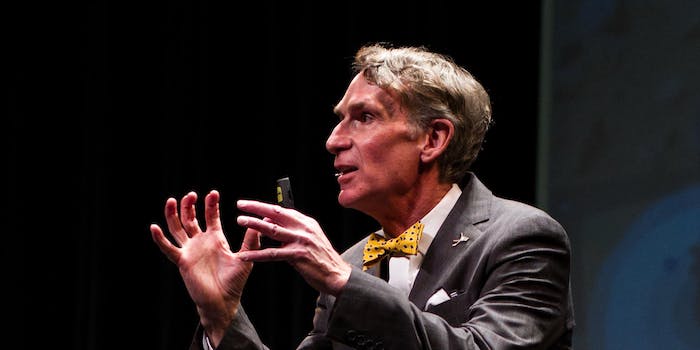 For such a prolific public figure, Bill Nye keeps a surprisingly low profile. What’s his origin story? What makes him tick? Two documentary filmmakers are looking to shed light on the science communicator’s inner workings.

Directors David Alvarado and Jason Sussberg say the documentary is for and by Nye fans. As such, they’re appealing to them to help fund the documentary through Kickstarter. The duo is looking to raise $650,000 to accompany Nye as he travels around promoting science. Nye himself has signed off on the idea, appearing in the documentary’s promotional video.

As with any Kickstarter, Alvarado and Sussberg are offering goodies for different levels of contributions. From emoji sets to dog bowties, to an opportunity to take a selfie with the Science Guy himself, there is no shortage of benefits for fans.

Variety reports that Alvarado and Sussberg are no newbies to the filmmaking world. The pair collaborated on the documentary The Immortalists; it’s also working with experienced producers Seth Gordon and Nick Pampenella—who wrote and produced Nye’s live show.

The documentary will focus on Nye himself, and his transition from “edutainment” to becoming an impassioned spokesperson for science. The film will also capture the mission launch for a low-cost solar sail (which raised more than $1 million in its own Kickstarter campaign) that will explore the cosmos.

Photo via Mark Schierbecker/Wikimedia (CC BY 3.0)