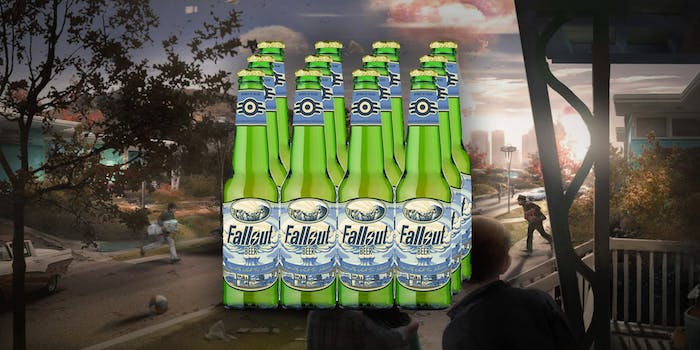 You'll want to preorder on Amazon.

With just two weeks until the next installment of one of its biggest series, Bethesda Softworks has released a preorder for a Fallout-themed alcoholic beverage.

The company has partnered with Danish company Carlsberg Breweries’ United Kingdom branch to produce Fallout Beer, with the drink’s bottling themed around the popular game. A 12-pack of the beer is now available to order on Amazon, but it is only slated for release in the U.K. effective Nov. 5.

“This is something of a world first. Adult participation in video gaming is a truly social activity, on a par with cinema and music,” Carlsberg U.K. staff member Bruce Ray told Metro. “We’re proud to work with Bethesda to produce a beer Fallout fans can enjoy.”

On Nov. 10 the company will be releasing Fallout 4—the fifth title in its action role-playing series—on Windows, Xbox One, and Playstation 4. The game’s first trailer and website launched on June 2, with an E3 reveal shortly after on June 14.

Since its announcement, preorder numbers are through the roof—with more than 391,000 preorders for the game across the three platforms as of Aug. 15, according to VGCharts.com.