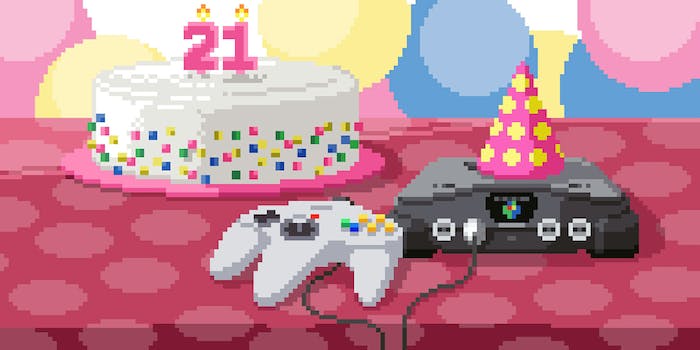 Though many folks celebrate the N64’s birthday in June timed with the Japanese release of the classic console, we here in North America have to wait until Sept. 29 to share the nostalgia.

This year, as the N64 shares its American birthday with the release of the new SNES Classic console, those warn and fuzzy video game memories are especially acute. We ranked the best games on the new miniature console here, but N64 also deserves some love on its big day.

Here are the 21 best games released on N64, in honor of its 21st anniversary. If you’re lucky enough to still have a console, dust off a cartridge for the rest of us today. (And if you happen to still have one of these games in its original box, maybe consider buying it insurance.)

They don’t make Bonds like Pierce Brosnan anymore, and they don’t make first-person shooters quite like this. We’ll never forget the practically perfect Facility level, the hilarious “slappers only” combat mode, or how mad our older brothers got once we figured out how to run while crouching as Oddjob. —Monica Riese

Sixteen iconic tracks, four brutal battle areas, countless ill-timed blue shells, and seemingly infinite replayability have cemented MarioKart 64 in the hall of fame of racing games. To this day, you can still elicit massive groans from a group of players simply for suggesting the idea of a Rainbow Road race; that’s staying power. Plus, the internet has been great for spreading shortcuts and secrets that we’re still working on figuring out for ourselves. —Monica Riese

3) The Legend of Zelda: Ocarina of Time

The Legend of Zelda franchise already had a loyal fanbase by the time the N64 showed up, but what the console gave us in Ocarina of Time was truly groundbreaking. Hyrule, up until that point a 2D world, burst onto our TVs in three glorious dimensions. I could wax on forever about Ocarina’s excellent storyline, the sheer joy of riding Epona across Hyrule field, and how in love we all were with Ocarina‘s iconic soundtrack. But the thing I remember best about turning on Ocarina was marveling at how good the (now primitive) graphics looked at the time. —Sarah Weber

Sure, the game had a one-player training mode, but that’s not what this game is all about. There’s nothing quite like beating the crap out of your friends in melee mode, and the original entry in the Smash Bros. series proved just that. The rest is esports history. —Monica Riese

5) The Legend of Zelda: Majora’s Mask

Ah, the N64—a console that gave us two new games in the Zelda franchise (instead of Nintendo‘s current track record of producing one for two consoles). Just two years after Ocarina of Time, Nintendo released Majora’s Mask, a game that may have looked like Ocarina, but was distinct both in tone and story. Majora’s Mask has gained a reputation for being among the franchise’s most polarizing games with its dark and strange storyline. Some fans didn’t get it, but those of us who did still rank Majora’s Mask among the best Legend of Zelda games of all time. —Sarah Weber

Nintendo continued its tradition of serving up a brilliant Mario franchise game with its N64 system. Super Mario 64 was a revelation—an open-world Mario game in true 3D. You could travel to many levels in the castle, often entering worlds you were not yet prepared for. Slowly unlocking new areas and discovering deep, obtuse secrets was incredibly rewarding, and it’s a mechanical masterwork, with a structure we take for granted in many modern titles. —Matt Silverman

Look, it’s functionally a GoldenEye knockoff (they were even released by the same publisher), but that doesn’t have to be a bad thing, right? —Monica Riese

It wasn’t the prettiest game in the world—CNET called it “unattractive,” GamePro said it “suffer[ed] graphically,” IGN suggested players “forgive and forget its looks”—but this console port of a much-beloved PC title was a welcome addition to the N64 landscape nevertheless. (You’ll note that strategy games are few and far between on this list, and its replay-ability and two-player mode were particularly appreciated.) —Monica Riese

Don’t let the PG packaging fool you: Banjo Kazooie Tooie this is not. The titular red squirrel has a drinking problem and a vulgar sense of humor, and reviewers absolutely loved it. If you dig BoJack Horseman now but never gave this one a whirl—especially if you weren’t allowed to because your parents took the M for Mature label seriously—see if you can track down a friend with a copy today. (You can shell out for your own, but the lowest price on eBay as of this writing was a cool $119, so…) —Monica Riese

After all of the brutal beatdowns of Smash Bros., a farming simulator always sounded like a pleasant palate cleanser. Sure, there are modern likenesses like Stardew Valley, but there’s something about the original that just feels right. Refurbish a farm, train a horse, accomplish little side tasks around the town, and feel accomplished about doing something with your hands without, you know, actually doing anything with your hands. —Monica Riese

No Nintendo reboot transferred more seamlessly to 64 bits than this fighter pilot game about a fox, falcon, frog, and rabbit tasked with saving the universe. The single-player mode was a spiraling epic wherein every level channeled the sound and fury of the trench scene from Star Wars. You couldn’t help but memorize the script, one wherein Slippy was the bumbling mechanic always in need of a handout; Falco was a smarmy Han Solo type; and Peppy the hare, who served with Fox Sr., offered fatherly advice to—you gotta figure—thousands of fatherless children being raised by their gaming consoles. —Ramon Ramirez

This third-person platformer is still sitting pretty with a 9.2 on Metacritic, and for good reason: Smart gameplay, a fun plot, good graphics, clever puzzles, and an adorably endearing protagonist. We’re bummed the multiplayer mode didn’t make it to this game, but Banjo-Tooie picked up the slack a couple years later. —Monica Riese

The first in what has become a franchise of Mario Party titles, Mario Party on the N64 introduced a generation of gamers to a game-within-a-game mechanic like Animal Crossing and many others. Players take turns rolling a virtual die to trigger progress around a board, with 53 mini-games across four different categories. It’s arguably only fun the first time—because by the end of the long round, you’ll have figured out all the game’s tricks—but that first time was always mind-blowing. —Monica Riese

With apologies to NBA Hangtime and its absurdist, frenetic arcade pacing that allowed for gameplay as a hoop-savvy extraterrestrial, this Kobe-endorsed vehicle wins on its attention to detail. For any child who dreamt of being an NBA star, this game perfected the art of create-a-player. Your season-manager mode was ahead of the curve, and the game rewarded critical thinkers who were just as excited about trading prospects as they were about the sleek five-on-five gameplay. —Ramon Ramirez

I completely forgot this game existed until it cropped up in a BuzzFeed listicle last year, and I was instantly awash with memories of my seventh-grade obsession with the redesigned Beetle—the poster, the economics project, the massive, massive marketing budget that was clearly never intended to be so effective on an 11-year-old. This is the definition of nostalgia. —Monica Riese

Probably the first glimpse casual Star Wars fans had into canonical “in-between” stories, Shadows of the Empire drops you right into the Battle of Hoth, and taking down AT-ATs with tow cables is incredibly fun (and hard). The narrative takes its own path from there. —Matt Silverman

Mario Kart gets all the clout, but this game was an addictive clone. It created a series of bland animal characters that, save for Bumper the badger, no one remembers. Screw karts, here you can also drive hovercrafts and planes, and unlike Mario’s band of selfish also-rans, Kong’s friends race while simultaneously trying to save the world. Even the multi-player mode boasted a fantastic capture-the-flag challenge. —Ramon Ramirez

Notable because it didn’t have an NFL license so the Carolina Panthers were just “Charlotte,” Madden 64 was the football gameplay that everyone wanted from the terrible Quarterback Club ‘98. In the mid-’90s, America’s sleepovers featured debates on merits of Madden for Super Nintendo and Sega relative to the late-era Tecmo Bowl iterations. There was only one path forward—and to this day the Madden franchise is a global behemoth. As the great John Madden would say in this video game’s canned commentary, “It’s a rough sport, sometimes people get hurt.” —Ramon Ramirez

Golf isn’t the most exciting game—especially for kids. So it’s pretty impressive that Nintendo managed to create a golf sim that’s fun to play. Nintendo sent its cartoony characters to the golf green for a surprisingly addictive experience that was even more of a blast when played with friends. —Sarah Weber