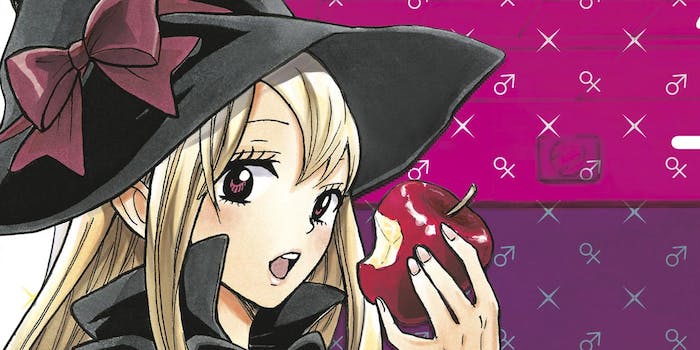 The 10 best manga you could be reading on Crunchyroll

There's a manga here for everyone.

Resolving to read more is a great way to get your 2018 started, especially if you add manga to your reading list. The medium is every bit as diverse as modern literature, and, if you’re a fan of anime and manga platform Crunchyroll, you already have access to a ton of great reads.

In no particular order, here are my top 10 manga available on Crunchyroll for fans of every genre.

The best manga on Crunchyroll

This manga has everything a hot-blooded shonen fan could possibly desire. Aspiring mage and summoner of celestial spirits Lucy runs away from home to join the legendary guild of wizards, Fairy Tail. She meets Natsu, user of fire dragon magic, and the two form a team. Wizard politics are hairy, so being a member of Fairy Tail means fighting other guilds almost constantly. The manga is essentially a never-ending escalation of quests and progressively stronger enemies looking to take Fairy Tail down from its top spot, which means epic magical combat and fantastical new worlds. The story isn’t particularly complicated, but it fits the fun-loving adventure and camaraderie between the rapidly expanding cast of guildmates.

For years one of Japan’s best-selling manga, Attack on Titan grew into an international sensation when its excellent anime adaptation by Studio WIT landed. Half gothic horror and half high-flying action, Attack on Titan takes place in a world where humanity hides behind massive stone walls. These barriers are built to keep out titans, large humanoid creatures who seem to exist only to consume humans. As the walls begin to fall, the story follows members of a military unit who discover revelations and conspiracies that involve the nature of the titans and the origin of their country. The series is acclaimed for its horrific visuals, visceral action, astonishing reveals, and cliffhangers that have made the anime agony for viewers waiting to see what happens next—so treat yourself and read ahead!

3) The Heroic Legend of Arslan

I know it’s passé to compare titles to Game of Thrones, but this manga definitely fits. The Heroic Legend of Arslan is the second manga adaptation of a 1986 fantasy novel series by Yoshiki Tanaka, which drew heavily from Persian history in the same way George R.R. Martin borrowed from that of Europe. This adaptation is by none other than Hiromu Arakawa, the creator of the massively popular Fullmetal Alchemist. She’s expertly adapted her style to this new fantasy setting, which has an even deeper sense of history. It follows a young prince whose kingdom is overthrown by a coup d’état and his journey to gather a downright Arthurian band of heroes to win back his throne. Enjoy this epic quest and coming-of-age story full of intrigue and all-out warfare.

4) Yamada-kun and the Seven Witches

Miki Yoshikawa, who previously worked as an assistant to Hiro Mashima on Fairy Tail, brings us a high school romance with a twist. The titular friendless high school delinquent Yamada accidentally kisses his classmate, the ace student Shiraishi, and finds they’ve switched bodies. One thing leads to another and the two become founding members of the school’s new supernatural studies club. They discover a campus legend that there are seven witches among the student body and each witch manifests their power out of the desire to resolve a personal struggle. A slow burn romance is accompanied by Yamada’s personal journey to help the witches, finding personal meaning through his efforts to understand and reach out to others.

One of the most prominent modern works of josei (manga for adult women), Princess Jellyfish follows the fateful encounter between Tsukimi, an aspiring artist obsessed with jellyfish, with a beautiful woman. Through a series of mishaps, she discovers the woman’s name is Kuranosuke, a crossdresser and the illegitimate son of a prominent politician. This romantic comedy has a surprising amount of punch. Aided by Kuranosuke’s unapologetic self-acceptance in the face of rejection by society and his father, Tsukimi and the other otaku residents of her dorm begin to grow out of confines of their modern hideaway and fight for acceptance in a society that considers them misfits.

Shuzo Oshimi is easily one of the most compelling storytellers currently working in manga, perhaps best known as the creator of Flowers of Evil. Komori, a college dropout and shut-in, finds himself in the body of Mari, a girl he had been idolizing from afar. This swap was a component of the recent hit film Your Name, but Oshimi thoroughly explores the concept in what becomes a sci-fi/psychological thriller. Horrified by the idea of ruining Mari’s life the way he has ruined his own, Komori attempts to live out Mari’s life without making waves while frantically searching for what has happened to her real identity. In the process, he discovers her life isn’t quite the pure existence he had been romanticizing.

The breakout work of mangaka Yoshitoki Oima, I can only describe A Silent Voice as a transformative read, ambitiously tackling immense topics such as disability and bullying with compassion and understanding. The unlikely protagonist Shoya is an elementary schooler who ruthlessly picks on the new student in their class, Shoko, who has severe hearing loss. When the faculty fails to take action, Shoko’s mother is forced to withdraw her from school and Shoya finds himself the victim of bullying as his classmates turn on him. Years later, the two are reunited and Shoya tries to find some possible redemption and forgiveness for committing the crime of robbing someone all the joys of childhood with his cruelty, a pain he has come to understand at the hands of others.

If you found yourself fascinated by the technical aspects of Matt Damon growing potatoes on Mars or Jake Gyllenhaal taking on a weird pink slime on the ISS, then I have a manga for you. Space Brothers is a more down-to-Earth take on space exploration, following the lives of Japanese brothers who have aspired to become astronauts since childhood. It takes its reader through the surprisingly diverse paths to becoming an astronaut, breaking down the psychologically taxing tests they undergo, the selection process for missions, and the intersection of space and politics. For how educational the manga is, it never loses track of its wonderful cast of aspiring astronauts. The manga has a great sense of humor to match its technical prowess and a laser focus on the dreams each character carries with them, to one day touch the stars.

This manga by josei superstar Moyoco Anno is narrated by Colette, a prostitute working in a 20th-century Paris brothel. Perversity is, by definition, out of the ordinary, so if your perversion can be named then it can only be considered normalcy. True perverts are those who have desires that cannot be named. Colette cannot name what she desires, jealous of her patrons who seem to be so keenly aware of what they want from her. Trapped in a life of prostitution, abused by her boyfriend turned gigolo Leon, and living in a house of girls all with nearly the same story, Colette and those around her attempt to find meaning and genuine connection in a dispassionate world. Memoirs is a haunting, dreamlike introspection that strikes at the heart of human uncertainty.

Kohei is a high school teacher and single father after the tragic death of his wife. His daughter Tsumugi spends her days daydreaming about good food, but he is an awful cook. He has a strange encounter with one of his students, Iida, who invites him and his daughter over to make dinner. They find she is an aspiring chef herself but with an unfortunate fear of knives and a busy mother who can only leave her recipes. Together, they follow the instructions and make a meal that wins Tsumugi’s approval. They make their meetings a tradition, tackling another of Iida’s mother’s recipes every week. sweetness & lightning is an unbelievably charming, mostly episodic, found family story about making and enjoying food together with your loved ones. It occasionally dips into serious themes but remains a reliably uplifting experience.

This list of manga titles should include something for everyone, from the biggest manga aficionado to a newcomer. What’s great about manga is that if you find an anime you enjoy, and you just can’t wait until the next episode, there’s most likely a manga to read in the interim. If you’re watching Inuyashiki this season, caught Ajin or Scum’s Wish earlier this year, or are looking forward to the next season of The Seven Deadly Sins, you can check in on any of their manga on Crunchyroll. I hope you achieve your New Year’s resolution and find some great new stories to love!

Peter Fobian is the associate features editor at Crunchyroll.