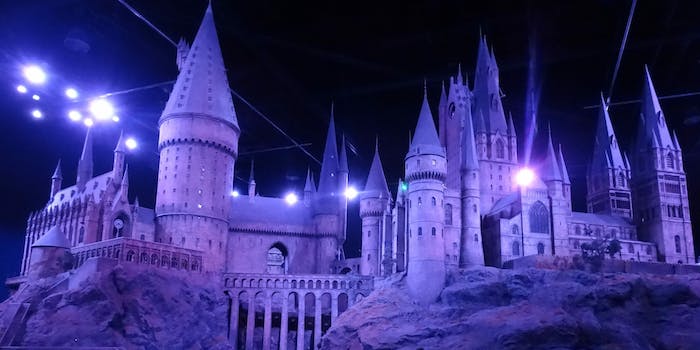 And the world was never the same.

It’s been 20 years since Harry Potter and the Philosopher’s Stone came out, and the world has never been the same.

The story of the Boy Who Lived is one that’s extended far beyond its initial audience, and it didn’t take long for fans all over the world to gather at their local bookstores to celebrate the release of each new novel. The series sparked eight blockbuster films, a two-part play, a mountain of merch, the Pottermore website, and an entirely new film franchise centering around Newt Scamander.

Even if you’re not a huge Harry Potter fan or haven’t read the books, the story has long been part of our collective cultural fabric. We recognize actors in other projects, and casually throw references around. And although we still can’t go to Hogwarts for our own magical education, we can still visit the “entrance” to Platform 9 3/4. (Just don’t run headfirst toward it.)

And that’s only scratching the surface of just how Harry changed our world.

1) A new lexicon of words and wizarding jargon

The wizarding world that J.K. Rowling created birthed an entire collection of new words, phrases, and spells, but one word broke out more than almost any other: Muggle.

The term wizards used for non-magical people is casually dropped in the first pages of Sorcerer’s Stone, but it isn’t properly defined until a few chapters later.

While we don’t spend all that much time with Muggles throughout the series (aside from the Dursleys), most mentions refer to people we don’t really see. Some fans latched onto the word because it’s just fun to say. (No-maj, the American wizarding term for non-magical people, has yet to really catch on anywhere.)

It only took a few years for Muggle to become official: the Oxford English Dictionary added it to its dictionary in 2003 and found much earlier instances of “muggle” appearing throughout history—though those definitions are definitely not how people know it today.

It’s far from the only word to break through. Wanting a Time-Turner is a way to suggest wanting more time to complete everything you need to do. If something’s out of reach or hiding, we wish we could “Accio” it, the spell for bringing an item to you. And of course people are still waiting for their Hogwarts letters offering admission to the school. Harry Potter can be used as a comparison in nearly every situation—including politics, though that’s both been applauded and criticized.

This doesn’t even cover all of the British-English words Americans learned because they obtained U.K. copies of earlier books, and later when the books kept those words in.

2) Your Hogwarts House is basically a window into your soul

Hogwarts students are sorted into four houses when they first arrive at Hogwarts: Gryffindor, Hufflepuff, Ravenclaw, and Slytherin. And whichever one you fit into—whether it’s of your own choosing, what others picked for you, or your official Pottermore’s quiz—it can reveal a lot about you.

It’s easy to say that Gryffindors are brave, Hufflepuffs are loyal, Ravenclaws are intelligent, and Slytherins are cunning. For awhile, many Hogwarts House quizzes were easy to trick so you’d end up in whichever one you preferred. As the Harry Potter books themselves showed, your House wasn’t a guarantee. Peter Pettigrew, a Gryffindor, was a coward who betrayed his friends while Severus Snape, a Slytherin, showed incredible bravery as a double-agent for Albus Dumbledore for nearly two decades.

The Pottermore Sorting Quiz, introduced soon after its launch, was much harder to fool. It left many people satisfied, while others had a minor identity crisis on their hands.

Although the Harry Potter series is obviously Harry’s story, Hermione Granger—the brightest witch of her age—is one of its unsung heroes.

She’s smart and can get Harry and Ron out of pretty much any situation, but she was a layered character with her own goals and agency. Even when we didn’t spend time with her, you got the impression she had her own life outside of the boys in it. Harry and Ron respected her—although they did slack off on some of their homework—and they needed her as much as or more than she needed them.

The representation of women and girls in fantasy and science fiction has gotten better in recent years, but back when Harry Potter first came out in 1997, Hermione was (and still is) a breath of fresh air, because so many people saw themselves in her. Fans have drawn Hermione as a woman of color in fanart for years, something Harry Potter and the Cursed Child embraced with the casting of Noma Dumezweni.

Plus Bloomsbury, the U.K. publisher of Harry Potter, revealed Monday that out of the hundreds of characters who appear in the books, it was Hermione who emerged as fans’ favorite character; Harry didn’t even make the top five.

Fans looking to visit the world of Harry Potter finally got their wish when Universal Studios’ Wizarding World in Orlando first opened its gates in 2010. It had rides, a mix of shops and restaurants from Hogsmeade and Diagon Alley like Ollivanders, Honeydukes, and the Hog’s Head. A second section, which has more of Diagon Alley and the Hogwarts Express, opened in 2014.

If you live or are based in the U.K., you can visit the Warner Bros. Studio Tour London at Leavesden Studios in England, a major exhibit of props and sets from the Harry Potter films. Or if you’re in London, you can visit “Platform 9 3/4” at King’s Cross Station. While located between Platforms 9 and 10 in the books, the real-world version is in a different location with a plaque and a cart for fans to “push” into the wall.

Fans celebrate the 20th anniversary of the release of the 'Harry Potter' books at Platform 9-3/4 in London. https://t.co/OUmalOk1VC pic.twitter.com/c4VjkC4srn

5) We got our Butterbeer

Whether it’s hot or cold, from the official Wizarding World, a Starbucks secret menu item, or of an original fandom concoction, butterbeer—the non-alcoholic beverage enjoyed by wizards and witches—exists. And that’s a good thing.

From Butterbeer to Twix, here are 23 @Starbucks frappuccino hacks to get exactly what you want: https://t.co/lVzZglalue pic.twitter.com/zElIw7ugiV

Quidditch is a fictional, complex sport played on broomsticks, and its popularity for Wizards is akin to soccer in many places around the world. Although we don’t have the flying part down quite yet, Quidditch as a Muggle sport has caught on, largely at college campuses. Hundreds of U.S. colleges have Quidditch teams and thousands are registered around the world with the international Quidditch Association. They even have a World Cup.

When Rowling first joined Twitter in 2009, she didn’t tweet all that much, telling her followers that “pen and paper is my priority.” In recent years she’s become far more active, using the medium to communicate with fans and reveal more from Harry’s world, share snippets of her life, and like many people, discuss politics. She has been particularly known for some of her more colorful and creative responses.

8) Every other property that came out of the series

Thanks to the success of Philosopher’s Stone 20 years ago, we have six other Harry Potter books, eight movies, Harry’s Hogwarts textbooks, and The Tales of Beedle the Bard. Oh, and every delightful parody, Fantastic Beasts and Where to Find Them, and Harry Potter and the Cursed Child.

9) Friendships that last a lifetime

Fans have been sharing their Harry stories with the hashtag #HarryPotter20 all day, where they revealed not only how they discovered the series, but also the friends they bonded with over Harry Potter. They waited in lines at midnight release parties together, watched the films together, and cosplayed together.