Photo via The Spider/Boom! Studios

We’re not sure what happened to kickstart this revolution, but fantasy comics are having a brilliant year in 2016. Assuming that you’ve already read 2015’s smash-hit Nimona (and if not, we recommend it!), here are nine of the best fantasy comics this year.

If you’re a fan of Sam Vimes from Terry Pratchett’s Discworld novels, you’ll love The Spire’s protagonist: a grouchy lesbian cop with mutant powers, dealing with interspecies conflicts, political backstabbing, and a very bloody murder. There are hints of Mad Max and Studio Ghibli’s Nausicaa of the Valley of the Wind in The Spire‘s worldbuilding, set in a secluded settlement in the middle of a vast wasteland. 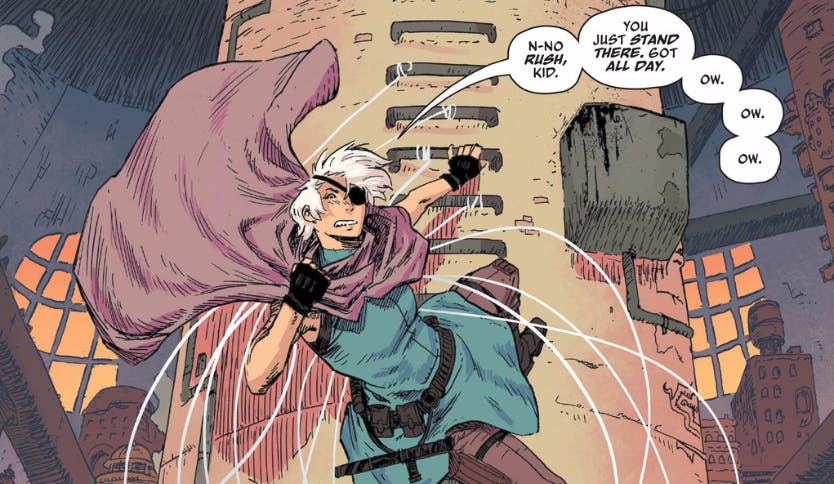 Written by Simon Spurrier and drawn by Jeff Stokely, this eight-issue miniseries finished in June, and a full volume will be published in December.

This YA graphic novel takes place in a city that has been conquered so many times, it no longer has a name. Armies come and go, renaming the city and ruling over its inhabitants until someone else comes along and takes over.

The main character, Kaidu, is training to join the Dao military, the tribe that currently controls the city. Ill-suited to warfare, he befriends a local girl named Rat, who teaches him to climb and run across the city’s rooftops. Writer/artist Faith Erin Hicks creates a politically complex world that younger readers will still be able to grasp, with each character representing a different view of the multicultural city. An excellent choice if you miss the heyday of Avatar: The Last Airbender. 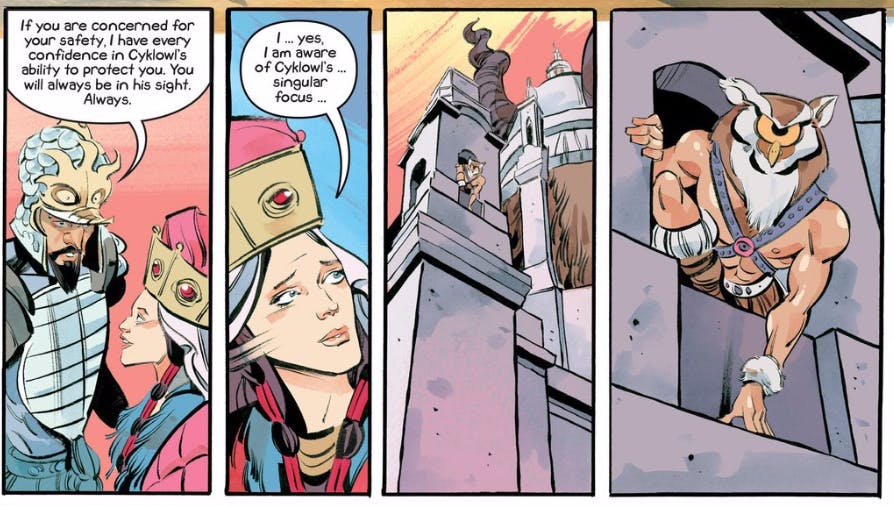 Kaptara is a pastiche of 1980s fantasy cartoons like Masters of the Universe. Nerdy gay space explorer Keith Kanga gets stranded on a planet populated by weird aliens and eccentric royals, a simple premise that is transformed into pure genius by the fact that almost every page includes a laugh-out-loud punchline, visual or otherwise. (We’re especially fond of the Motivational Orb, a floating orb that does nothing but quote motivational phrases at the heroes.)

The first five issues came out last year, and we’re expecting more in the latter half of 2016.

As you can probably tell from the title, Monstress is one for the monster enthusiasts. The first volume was a breakout hit this year, a fantasy epic written by Marjorie Liu and drawn by Sana Takeda. Speaking to THR, Liu describes it best:

“The world of Monstress is one that has been torn apart by racism, slavery, by the commodification of mixed race bodies that produce a valuable substance that humans require like a drug. Even if you look human, you might not be safe. It’s a familiar story to people of color in this country, and in the last four or five years I’ve found myself deeply immersed in the study of identity and race, especially in the Asian American context.”

This manga-influenced war story is probably the most adult-rated on our list, opening with its protagonist naked, enslaved, and bound in chains. It’s a dark and complex tale of survival in what Image Comics describes as “alternate 1900s Asia,” focusing heavily on relationships and conflicts between women. Sana Takeda’s art is gorgeously detailed and lush, ranging from gold-filigreed gowns to gory, grotesque monsters. 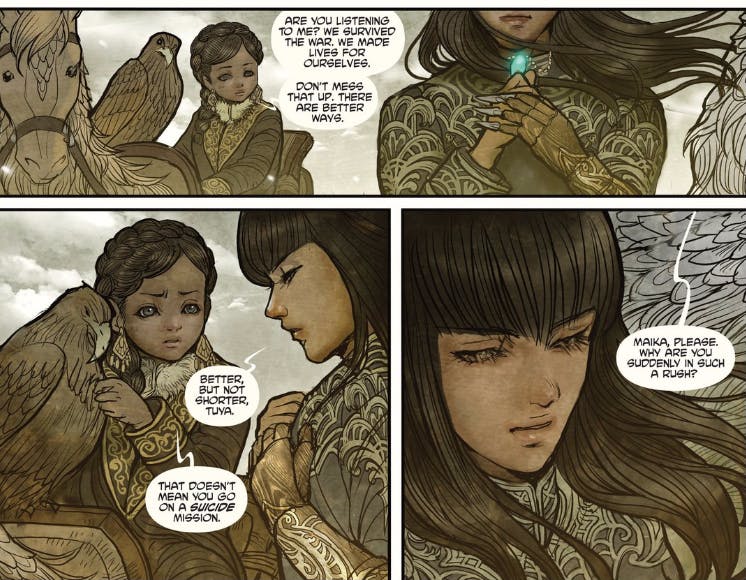 If you’re into worldbuilding, the ongoing webcomic Stand Still, Stay Silent is your jam. Created by Minna Sundberg, the main narrative is supplemented by detailed maps, poetry, and informative footnotes. (It’s also a lot more fun and lighthearted than that level of academic detail might suggest.)

Set 90 years after the end of the world, Stand Still, Stay Silent is about a team of explorers who travel beyond the “safe” area (Iceland, and some parts of Norway, Sweden, Denmark, and Finland) where the remaining humans live. It’s an interesting balance of contrasting themes: a light and breezy tone for a post-apocalyptic setting, combining some classic fantasy mythology with a contemporary setting. Rather than being an intrepid squad of Lord of the Rings-esque heroes, the main characters are described as “a poorly funded and terribly unqualified crew” of researchers. 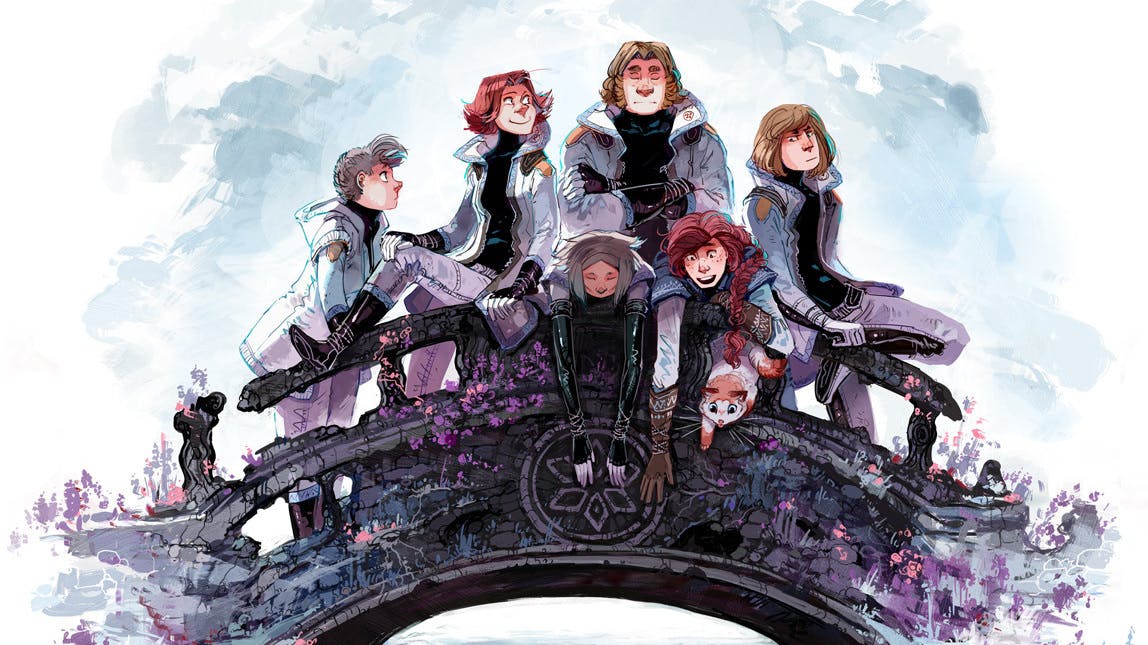 Like many webcomics, Stand Still, Stay Silent takes a while to get going, but its flourishing fandom proves that the slow-burning story is worth the wait. Book 1 raised $124,000 on Indiegogo, and the comic continues to inspire plenty of fanfic and discussion online.

Written by Brandon Graham and drawn by Marion Churchland, Arclight is one of several stories from 8House, a series of fantasy comics set in the same world. Churchland’s sparse, subdued art introduces a dreamy yet dangerous world of feuding aristocrats, in a dialogue-light story that gives very little away.

The title character, Arclight, is a loyal knight whose mistress, a “lady of the blood house,” is trapped in the physical form of an amorphous black blob. This mysterious and atmospheric tale is worth rereading several times—which is just as well, because the first two issues came out in 2015, with issue #3 expected later this year.

What are those three magic words every person wants to hear? Ah, yes: “gay centaur Western.” 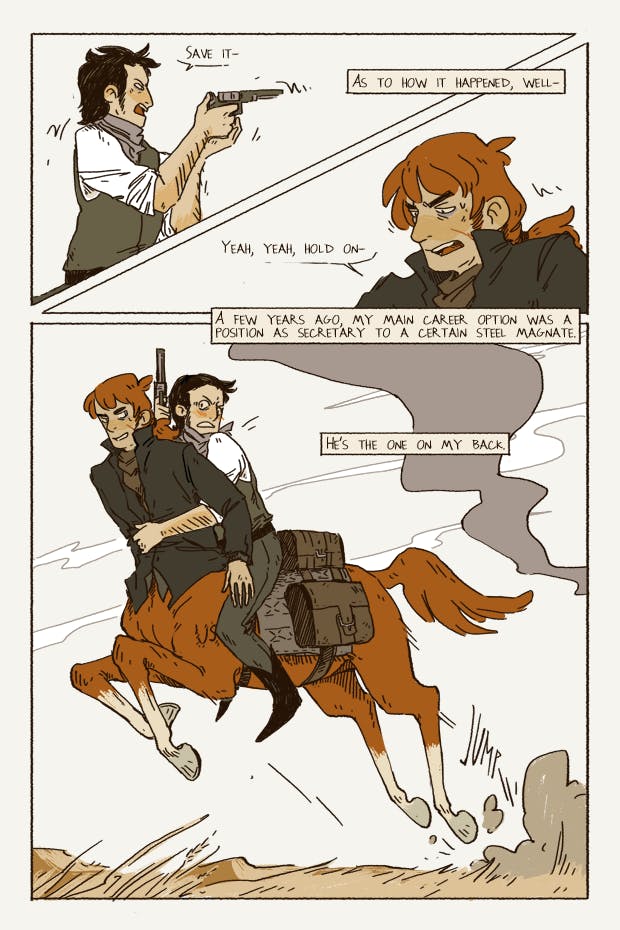 Created by webcomic artist Toril Orlesky, Hotblood! is a gritty-but-funny Western about a centaur and a human forced together by circumstance. As per our interview with Orlesky in 2014, this comic has a cult following due to its grumpily charming characters and unique concept. Vol. 1 wrapped up earlier this year, and a sequel story is on the way.

The Wicked and the Divine

It almost feels unnecessary to recommend the comic series that fans affectionately call WicDiv, because it’s already such a huge hit. Created by Kieron Gillen and Jamie McKelvie, it’s a modern urban fantasy about pop music, fandom, and death.

Every 90 years, a Pantheon of 12 reincarnated gods return to Earth as world-changing artists. For two years they have talent, adoration, and supernatural powers, but after that they are doomed to die. WicDiv’s Pantheon of pop stars were inspired by icons like David Bowie, Prince, and Rihanna, but the point-of-view character is a young fan named Laura. 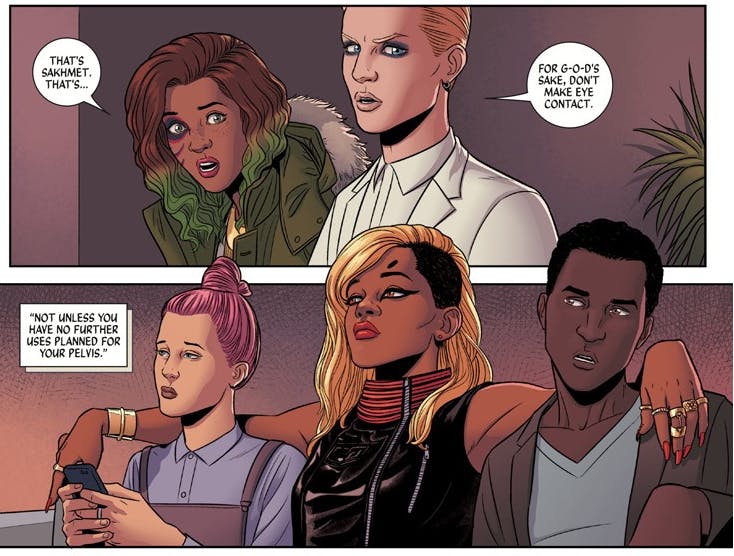 The Wicked and the Divine

Infamous for its shocking plot twists and character deaths, you either need to read each new issue immediately, or find some way to block spoilers from your social media feeds. It’s also an ideal source for cosplay inspiration, thanks to McKelvie’s expert grasp of fashion trends. Everyone in WicDiv looks ridiculously cool, but they’re wearing clothes you could conceivably wear in real life.

This is of those comics where you can tell within a couple of pages that it’s going to be incredible. The main characters are compelling and strange: the mage Ivan, who hopes for a better future; his mentor, Kazbek, who keeps intelligent animal-people prisoner in the hopes that they can teach him something useful; Sena, a dog-woman who shares a romantic history with Ivan; and Zun, a young and wide-eyed lab rat who is sent on a dangerous mission.

Emma Rios’ writing makes it very easy to sink into the world of Mirror, building a compelling blend of deep emotion and engaging backstory. Artist Hwei Lim gives the comic a unique look, with pale watercolors adding a dash of sunlight to a colorful landscape of mosaics, airy architecture, and flowing robes. 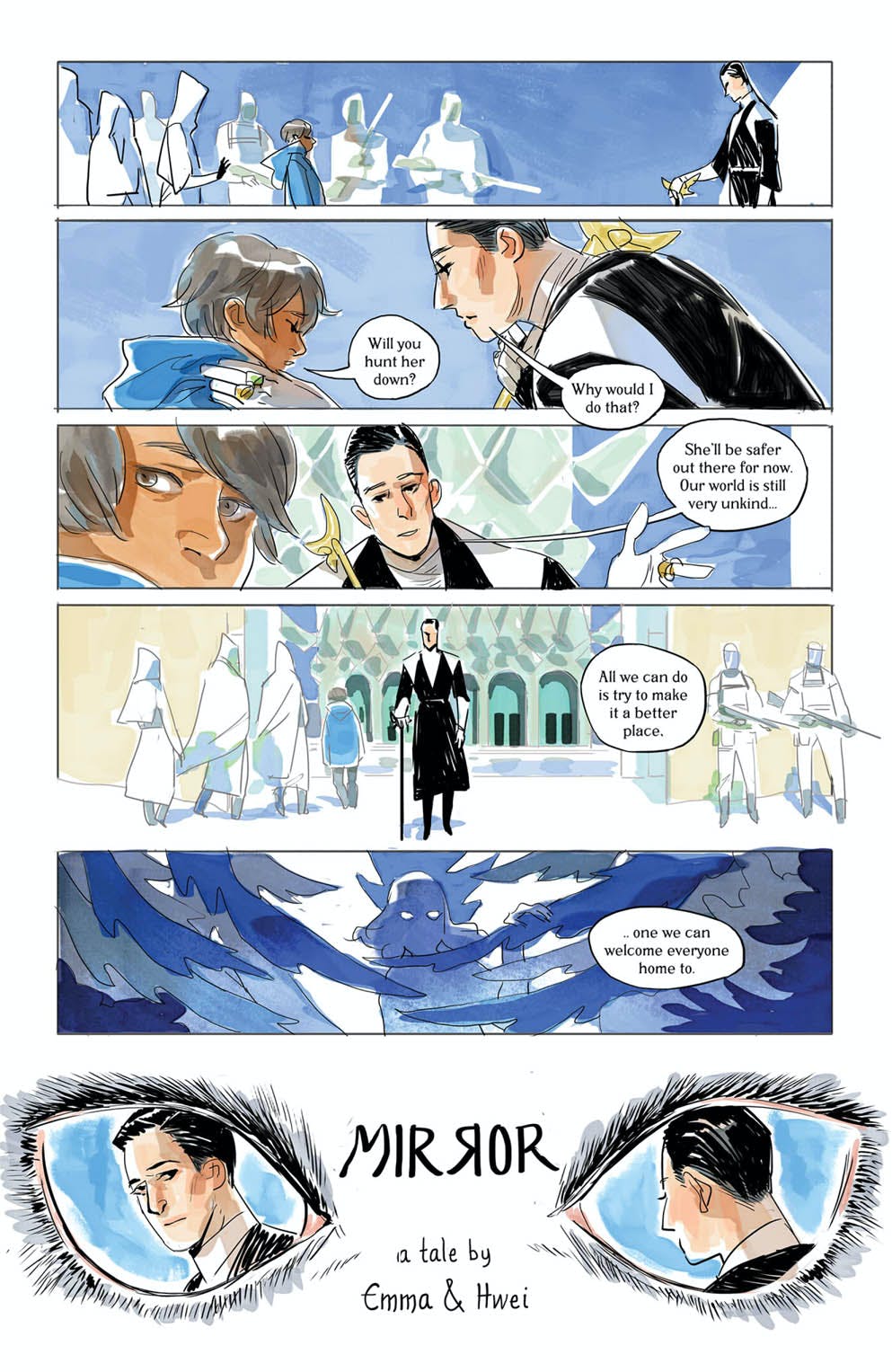