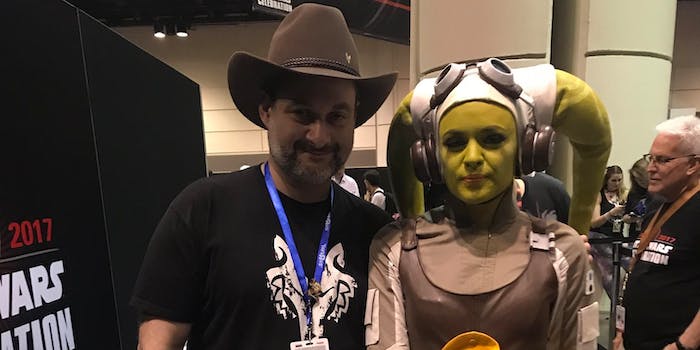 Star Wars Celebration is over for another year, after unleashing The Last Jedi teaser, an introduction to Star Wars: Battlefront II, and a ton of cool moments with stars like Mark Hamill.

Nothing measures up to the real experience of attending the con, but there’s one element that always finds its way online: awesome cosplay photos. Celebration was full of brilliant cosplayers, and we’ve tracked down some of the most original examples this year.

Star Wars is a gift to family cosplayers, because the franchise is full of literal families and kid-sized characters like Ewoks and Jawas. (And baby BB-8s, an adorable new addition to the genre.) This family decided to cosplay as Bail and Breha Organa, with their adoptive baby Princess Leia. A recognizable choice that still doesn’t have much competition on the cosplay circuit. And they look great!

The Rogue One reenactors

With tons of stormtroopers, Jedi, and Rebel Alliance soldiers on site, Star Wars Celebration often inspires some mini-reenactments from cosplayers. This year’s star turn came from a Darth Vader, a Princess Leia, and a team of Rebels, who reenacted the already-iconic ending scene from Rogue One.

This year was Hayden Christensen’s first appearance at a Star Wars convention since 2002, marking the end of a long absence. So, it was pretty awesome to see him doing dorky stuff like signing a jar of sand and posing for photos with a human-sized lightsaber.

This isn’t technically a cosplay outfit, but it’s one of our favorite fashion choices of the con. The Last Jedi actress Kelly Marie Tran (who plays the new lead character Rose) wore a “What Would John Boyega Do” sweatshirt onstage, proving that she’s a fangirl just like the rest of us.

We foresee a lot of Star Wars fans following suit by making WWJBD shirts of their own. A motto to live by.