The best board games for big groups and parties

Need a board game pick for your next party? We've got you covered.

It’s the catch-22 of board games: The more popular tabletop gaming becomes, the more people want to play. And the larger the group, the fewer options there are available. But that doesn’t mean there aren’t great board games for groups of all sizes.

Here, we’ve collected seven options for board games for parties that will support five players or more, ensuring nobody is left out of the fun.

The best board games for groups and parties

Play instead of: Charades
Play this with: Your word-loving friends, friends who overanalyze everything
Number of players: 2-8 players, but anecdotally, as many as you can squeeze around the table without chaos unfolding
Time to play: 15 minutes, depending on how many overanalyzing friends you invited

One designated player from each team acts as “spymaster,” trying to get his or her teammates to guess all the words in a five-by-five array that correspond to their color on a tiny grid only the spymasters can see. Give the right one-word clue, and your team can unlock a handful of thematically related words at once; give the wrong one, and you might lead them to guess something for the other team—or worse, the assassin, ending the round immediately.

The bigger the group, the more second-guessing will inevitably occur, and you’ll have to watch out for those friends with a seemingly unending supply of inside jokes that will carry them to victory.

For bigger, ballsier groups, try the mildly NSFW Codenames: Deep Undercover expansion from Target. If you’re up for a challenge, take a swing at Codenames: Pictures, where each card is an image with a few different attributes, rather than a single word with a few potential meanings.

Play instead of: Doing puzzles
Play this with: Your goofiest friends
Number of players: 3-6, or up to 9 with the expansions
Time to play: 5 minutes

You didn’t misread that play time estimate. Each round of this fast-paced card game about a hapless crew trying desperately to keep their ship from falling apart goes by so quickly that you’ll want to play four or five in a row.

Adapted from a popular app by indie developer Henry Smith, this version translates many of the mechanics for introducing chaos to the gameplay into cards for players to resolve as a team before the time runs out.

Two expansions are available: the NSFS (not safe for space) edition with some exceptionally phallic tools cards, and the Triangulum expansion, which also ups the player limit but in a less risqué way.

Play instead of: Pictionary
Play this with: Art-school dropouts and Pictionary champs
Number of players: 4-8, or up to 12 with the Party Pack expansion
Time to play: 30 minutes

Smush Pictionary and Telephone together to get this hilarious lost-in-translation game that’s perfect for large groups with no artistic talent whatsoever. Full disclosure: You could cobble this together with a few pads of sticky notes and an old dictionary, but the reusable dry erase boards keep everything neat and tidy if you spring for the official set.

Play instead of: Truth or Dare
Play this with: The Adult Swim fans in your life, friends with no shame
Number of players: 2-6
Time to play: 20-30 minutes

OK, the name is a mouthful, but the game is a delight for fans of the Adult Swim cartoon. In one episode of Rick and Morty, alcoholic mad scientist Rick gives his family a Mr. Meeseeks box: Simply press the button on top to summon a gangly blue dude who literally lives to serve.

This party game plays on that mechanic, with each player drawing “request cards” that they have to fulfill with certain specific dice rolls. If you go looking for help for a Meeseeks, that could help you earn your precious victory points faster, but at what cost? Play instead of: Go Fish
Play this with: Studio Ghibli fans
Number of players: 2-8
Time to play: 20 minutes

This “pick and pass” game has players select one card from a group and then passing the remaining hand on down to the next person. It’s a mechanic familiar to players of 7 Wonders (see below), but this time the keeper cards are all adorable cartoon depictions of Japanese fare like sashimi and wasabi. Make the best combination of sushi to score points.

The party pack edition includes almost two dozen different dishes that you can pick from to customize gameplay for each round. If you own Sushi Go’s original box, you’ll get a kick out of how enormous the party tin is.

Play instead of: Apples to Apples
Play this with: Buddies from college, or literally anyone but your parents
Number of players: 4-30
Time to play: 30 minutes

You know the deal by now: Take turns reading out fill-in-the-blank prompts from white cards for the other players to complete with the black cards in their hands. The player with the funniest/raunchiest/cleverest answer wins the round, and the game continues until folks tire of it, become too drunk to play, or get bummed out by the appearance of the “smegma” card.

There are more expansions for CAH than we can keep count of, but trust us when we say the possibilities are practically endless at this point.

Play instead of: Cow tipping
Play this with: Your favorite pyrotechnic; probably not vegans
Number of players: 2-6
Time to play: 25 minutes

Become a hero to French villagers when you solve their issues with unexploded landmines and mad cow disease in one fell swoop. You grow your herd by paying for proud cows, fine cows, sturdy cows, and more, and then roll the die to see who goes “boom” instead of “moo.” Be careful, though: Other players can steal your cows or cause trouble with spies.

Though five- and six-player rounds are on the outer edge of this game’s limits, they just mean faster rounds—and more potential for treachery! Play instead of: Old Maid
Play this with: Crowds more comfortable with traditional card games
Number of players: 2-7
Time to play: 30 minutes

“The game isn’t over ’til the kings go wild!” might sound like a weirdly progressive Spring Break MTV special, but this game is actually a family-friendly fave. Players take turns drawing and discarding cards to use up all of their hand in runs or sets of three or more cards. It’s a little different from your normal deck of cards, though, in that there are five suits to juggle, and the hand sizes increase each round (from three to 13), keeping players busy trying to make sure all their cards are accounted for. Beware the five round, friends. 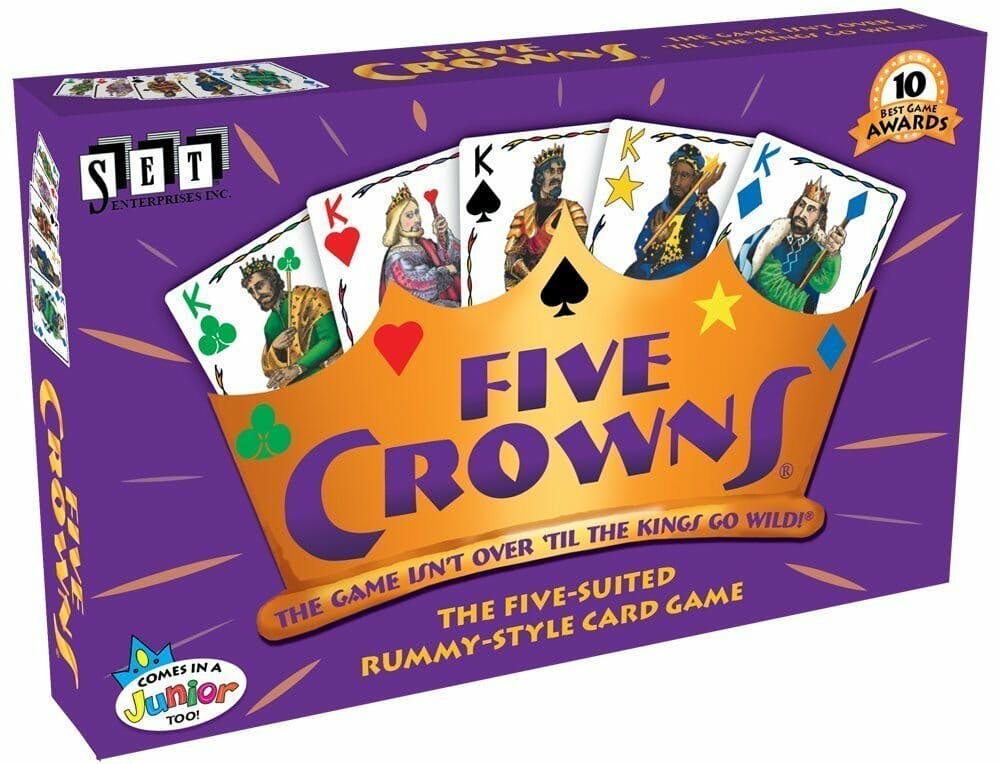 Play instead of: Cards Against Humanity
Play this with: Your irreverent pals who’ve tired of the Bigger, Blacker Box
Number of players: 3-10
Time to play: 30-90 minutes

There comes a time in every friend group when you feel like you’ve played every card in the deck. Maybe you’ve been friends for decades and graduated together from Apples to Apples to Cards Against Humanity. But even with expansion after expansion of CAH, it’s easy to feel like you’ve cracked the code. Enter Joking Hazard. The creators of webcomic Cyanide & Happiness released this party game after a successful Kickstarter campaign in 2006. Instead of just a white card/black card phrase duo, this game relies on images: A random card is played first, the “judge” picks a card from their hand for second, then each other player plays their selection for the third panel of this bizarre comic. With the additional cards in play, the replayability is increased exponentially, and the visual nature of the game allows for almost infinite interpretations of the scene. 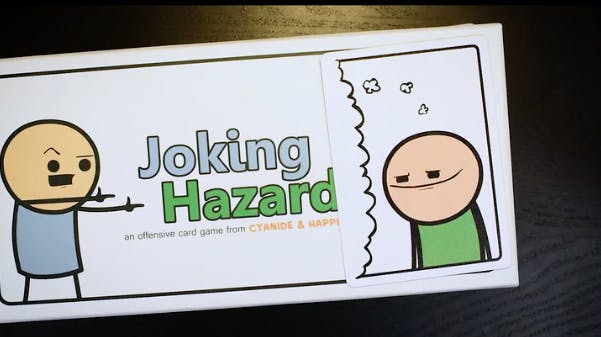 Play instead of: Gambling
Play this with: Your most cutthroat friends
Number of players: 2-7
Time to play: 45 minutes

No beans about it: This game is a little bizarre. Players are growing bean fields of various types, trying to earn a few gold coins for selling offsets of like types. But the ability to barter and trade with your fellow bean farmers—you name your price for a high-value crop, or desperately offer anything to get rid of a pesky spare instead of having to plant it—make this game potentially hilarious. Sure, it’s playable with anyone 13 and up, but we think the best version of this game would be a bunch of Wall Street stockbrokers on their off day, kicking back and bartering over beans. 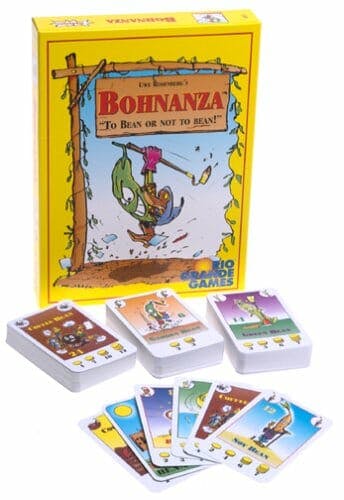 The Daily Dot may receive a payment in connection with purchases of products or services featured in this list. Click here to learn more.