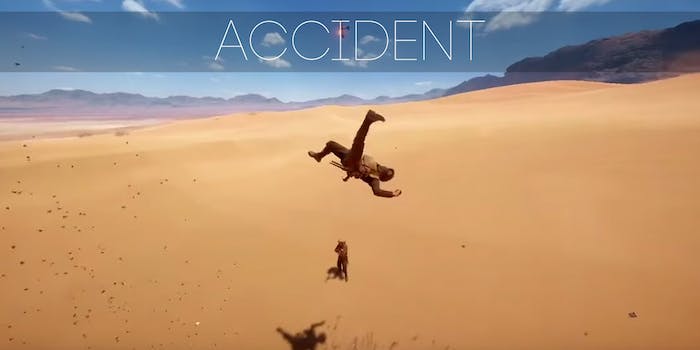 The funniest moments from the Battlefield 1 beta

Embrace the chaos of Battlefield.

You might find it difficult to take a military shooter that features corpse golf, mountain-scaling horses, and dancing planes seriously, but this is Battlefield.

You have only a few more days to enjoy the open beta for Battlefield 1 available on PC, PlayStation 4, and Xbox One. It’s a limited experience with only a single map, and it has the kind of bugs you’d expect from a beta test.

It’s also unmistakably a Battlefield game as measured in part by the hilarious chaos that regularly ensues when you put 64 players together and hand them a cavalcade of dangerous vehicles and explosive devices. Here is a small collection of videos showing how crazy a match of Battlefield 1 can get.

Who says you need a gunner in a biplane? You can fly and shoot at the same time. Just make sure you get back into the pilot seat before the plane corkscrews into the ground.

We realize this is just a bug, but how do you not enjoy dancing biplanes?

Guns are great for shooting down enemy planes, but mid-air grappling also seems to work. Just make sure you get clear of the crash site.

Battlefield 1 introduces horses, a first for the franchise. A scimitar-wielding rider can be bad news for infantry, but horses don’t hold up well against armored cars and tanks.

Enjoy creating your own moments of comedic chaos in the Battlefield 1 open beta, which ends on Thursday, Sept. 8. The retail release of Battlefield 1 will hit stores on Oct. 21.