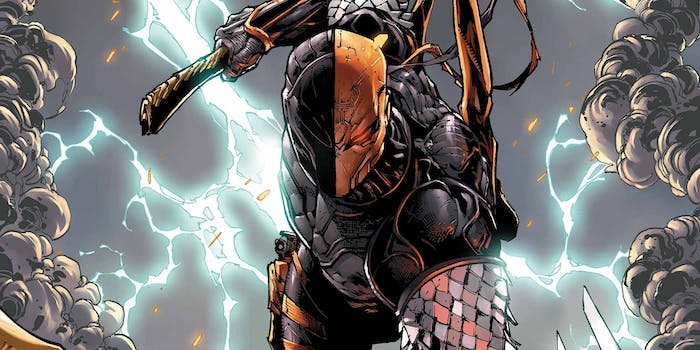 Could Deathstroke be one of the villains in Zack Snyder's 'Justice League'?

Either Ben Affleck is trolling millions of DC Comics fans—unlikely, since he isn’t known for his impish sense of humor—or he just hinted that Deathstroke is joining the DC movie universe.

Affleck tweeted a video of the B-list Batman villain on a movie set, presumably Zack Snyder‘s Justice League. Deathstroke hasn’t been officially announced as a member of the cast, but this strongly implies he’s one of the film’s antagonists.

Deathstroke is a masked assassin/mercenary who was recently portrayed by Manu Bennett in Arrow. Based on some social media posts from Arrow creator Marc Guggenheim, The Wrap seems to think he will be the main villain in Ben Affleck’s solo Batman movie. If so, he’s a pretty strange choice.

Any Batman adaptation has a wide range of villains to choose from, but Deathstroke just isn’t very interesting compared to Catwoman or the Riddler. He also looks confusingly similar to Suicide Squad‘s Deadshot, another mercenary/assassin character who wears a mask. It’s hard to see why Justice League would introduce two near-identical characters within a year of each other, but we wouldn’t rule it out. The DC/Warner Bros. franchise has made some puzzling choices during its last few films, after all.