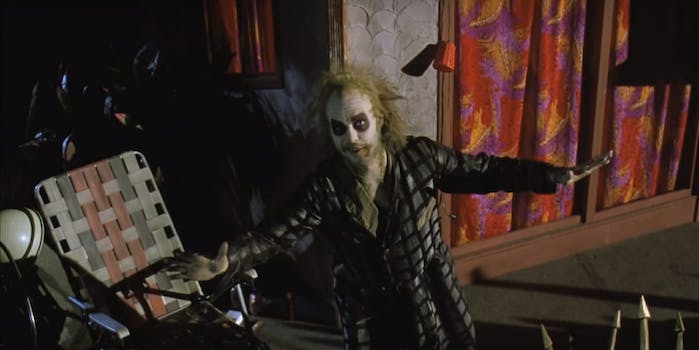 Hollywood’s preoccupation with resurrecting all of our ’80s childhood favorites has many people hoping that Beetlejuice will come back to haunt us.

But it won’t happen anytime soon.

The Independent has confirmed that rumors of Beetlejuice 2 floating around the Internet this week aren’t true. “Tim did not provide a statement to confirm Beetlejuice 2 as the movie is not in development,” a spokesperson for Burton told the news site. “Tim’s focus is entirely on ‘Miss Peregrine’s Home For Peculiar Children’ and developing ‘Dumbo.'”

Speculation about the sequel to the beloved 1988 horror comedy began this week when a website called Showbiz Spy said it had direct confirmation from Burton that “the film is a go.”

THEY'RE MAKING A NEW BEETLEJUICE!!!! IM SO FUCKING HAPPY THIS IS MY CHILDHOOD NOTHING CAN RUIN THIS DAY

BEETLEJUICE 2 IS AN ACTUAL THING. AND WINONA IS GOING TO BE IN IT AGAIN. ALONG WITH MICHAEL KEATON OMG

Reports also surfaced in December 2014 that the movie was in the works. Winona Ryder, who would presumably be reprising her role as Lydia Deetz, triggered another wave of excitement when she mentioned her involvement in the sequel on Late Night with Seth Myers in August 2015.

But in January, Michael Keaton—who’s been riding high after critically acclaimed roles in back-to-back Oscar winners Birdman and Spotlight—told the Independent that he had “no idea” about the status of Beetlejuice 2. Even so, he confessed that he’d enjoy revisiting his role as the irreverent ghost with the most.