Why wait for Christmas 2015 to lose your mind over Martin Freeman's bowler hat?

Still, the Internet’s never needed much excuse to lose its mind over Benedict Cumberbatch—and Tuesday the BBC One Twitter account gave it a good one.

Yep, that’s Sherlock co-stars Cumberbatch and Martin Freeman in what looks to be a clever homage to their Sherlockian predecessors, Jeremy Brett and Edward Hardwicke. 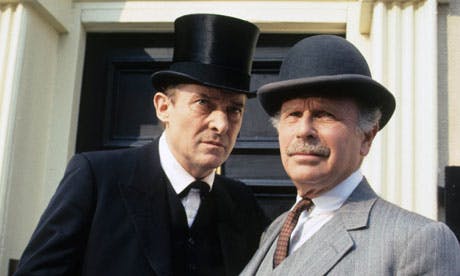 The photoshoot isn’t the only teaser the Sherlock crew has had up its sleeve—earlier today producer Sue Vertue tweeted a glimpse of the Season 4 shooting script as well.

This is what we've been doing today! Later on a pic of Sherlock and John as they'll appear in the Special #221back pic.twitter.com/Aq4vncKpKy

Assuming Vertue’s not toying with us, the news that Sherlock and Watson will actually find reason to don the high hat and bowler in the Christmas special is intriguing.

At the least, it will give fans plenty of possibilities to mull over as the long wait for the next season of Sherlock unfolds—or at least plenty of fanfic to write.