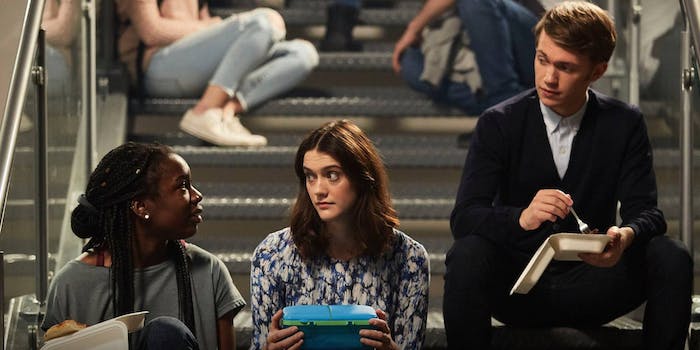 ‘Class’ is a disappointing addition to the ‘Doctor Who’ universe

Set in an English sixth-form college, the new teen-friendly 'Doctor Who' spinoff doesn't live up to the hype.

Class is a disappointing example of how a talent for prose fiction doesn’t necessarily translate to the screen. Acclaimed young adult author Patrick Ness wrote the entire first season, and judging by the first two episodes, it doesn’t live up to the quality of his gripping and original novels.

Billed as the British Buffy, Class takes place in Coal Hill School, a regular fixture in the Doctor Who universe. Like Torchwood‘s Cardiff HQ, Coal Hill is home to an interdimensional rift that spits out alien marauders in a convenient monster-of-the-week schedule. Our protagonists are, of course, a ragtag squad of good-looking teens, flung together by circumstance.

Unless you’re completely new to supernatural teen dramas, Class will seem hopelessly formulaic. In the first two episodes, it offers nothing we haven’t already seen in Buffy, Teen Wolf, or Smallville. The comparisons to Buffy are especially unflattering because Class displays none of its subversiveness or wit, and Buffy was already playing with old tropes when it premiered almost 20 years ago.

Class‘s charming young cast do the best they can with roles that basically amount to stock characters: Ram the arrogant jock, Tanya the quiet young genius, Charlie the alien with a humorous lack of pop-culture knowledge, and April, a “nice girl” who feels like an outcast due to her nice-girlness—although the show doesn’t display much evidence to back this up.

The most interesting relationship so far is between Charlie and the team’s reluctant overseer Miss Quill, a Snape-like figure who openly loathes teaching at Coal Hill. We soon discover that she’s an alien freedom fighter, convicted and sentenced to act as a bodyguard to Charlie, the crown prince of the ruling class she was trying to overthrow. Bitter and vindictive, she’s totally unsuited to babysitting the wide-eyed Charlie, who is so naive that he doesn’t understand the human concept of homophobia until after he asks a boy to prom.

The first episode introduces an invading army of aliens known as Shadow Kin, unmistakably similar to the shadows from Steven Moffat‘s iconic Doctor Who episode “Silence in the Library.” Unfortunately, Class‘s shadows have none of their menace, coalescing into CGI monsters whose backstory is explained at length by Miss Quill. This is the species who forced her and Charlie to flee to Earth, after massacring each of their cultures—which would seem a lot more impressive if the Shadow Kin weren’t dispatched by the Coal Hill teens within a single episode.

The basic ideas behind Class aren’t bad. Coal Hill’s Buffy-esque Hellmouth status is unoriginal, but that isn’t a problem in itself. The real issue is the clumsiness of the writing, relying on predictable character arcs in the pilot and only graduating to the level of an average Teen Wolf storyline for episode two. Its occasional stabs at pop culture savviness are self-aware but stilted, including an awkward Bechdel Test joke within the first five minutes.

While Doctor Who usually creates a relatable but specific background for its human characters (for example, Rose Tyler’s working class upbringing and obnoxious but lovable mum), Class‘s setting feels so generic it could easily be transposed to an American TV high school. The first episode even culminates in a showdown at prom, an event that feels quintessentially American despite being adopted by many British schools and inexplicably takes place in the middle of a school year. Why not just make the most of Class‘s teen-friendly rating and have the kids go to a realistically grungy house party instead?

Britain doesn’t produce as much teen programming as the U.S., which may explain why Class follows so many familiar formulas from American TV. The British teen dramas that actually did stand out in recent memory—Skins, My Mad Fat Diary, Misfits—all shared a sense of individuality and rebelliousness, along with a specifically British tone and setting. The main thing Class has in its favor is its cast of lively and likable newcomers, who do at least represent the diversity of a London sixth-form college.

Thanks to its link to Doctor Who, Class may be the BBC’s most high-profile teen show in years. It’s just too bad it doesn’t live up to the hype, failing to move beyond a watered-down Joss Whedon structure or exhibit fresh insight into young adult life. With so many brilliant teen dramas already available elsewhere, it’s hard to see what Class has to offer unless it drastically improves in later episodes.