Meet the man behind this genius Baymax Stormtrooper

If you think this cosplay looks pro, you're right.

There’s something special about hybrid cosplay that puts it a notch above your average creation. You’ll pass them by in a con hall, shake your head, and mutter, “Why didn’t I think of that?”

This mash-up of Baymax from Big Hero 6 and a Star Wars Stormtrooper is one of those genius inventions. Its creator, Ben Garcia, told the Daily Dot in a Skype interview that creating it took roughly three months, and he’s still adding some finishing touches.

As for wearing the unwieldy looking costume, Garcia admitted that he’d have to stand through the cons he plans to bring it to. While the small legs do extend up into the costume, they only allow the wearer to take 3-4 inch steps, just like the real Baymax.

Despite looking heavy, the costume is actually light. Garcia used EVA foam to build the armor atop a wire frame, remarking that four sheets of the foam retail for under $10. Because of that, he was able to keep the cost for the project fairly low.

If Garcia seems laid back about creating something so unusual, he is—probably because he does it all the time. He co-owns Nebraska SFX studio Wetworks SFX, which has been working in film and TV for the last three years. That’s the reason the Baymax Trooper took as long as it did to build, because Garcia juggles a full-time day job during while working at the studio at night. Otherwise, he says, it would have taken about three weeks.

“(For a project like this), it’s a little bit here and there, and then I have to work on other projects, stuff I’m actually getting paid for,” Garcia said. “Plus I didn’t want to rush. I just felt like—most of the times this is not just me, it’s every cosplayer—you get down to that last minute and you’re two or three days out and you’ve got 100 things to do. This time I thought I’m really going to space it out, and make sure I get it done and not be stressed about it. And it paid off, it turned out really good.”

Despite how cool the costume is, it won’t be out on the con circuit long, as Garcia has a firm rule that he only wears costumes he makes for a year.

“I don’t want to be that guy that plays the same character every single time you see him,” Garcia said. “For my last costume, I did the Comedian from Watchmen. After I wore it a while, I sold it to a guy that lives in San Diego. He told me he’s thinking of taking it to to Comic-Con. He paid enough for it, so he should!”

Garcia has had an interest in SFX since childhood, and has been making stuff just for fun ever since. When it came to the idea of creating Wetworks, he knew he needed a partner, so he reached out to a woman he met when they both worked on a music video together. Luckily, she was just as enthusiastic as he was about the idea.

“I was at a local zombie walk in Lincoln, Nebraska, and my girlfriend at the time and I decided it would be great to do the craziest zombie makeup ever and blow all the attendees away,” Garcia said. “It just so happened that there was a scout there, and he asked to be put in contact with the person that did our makeup for a zombie music video they wanted to make.” 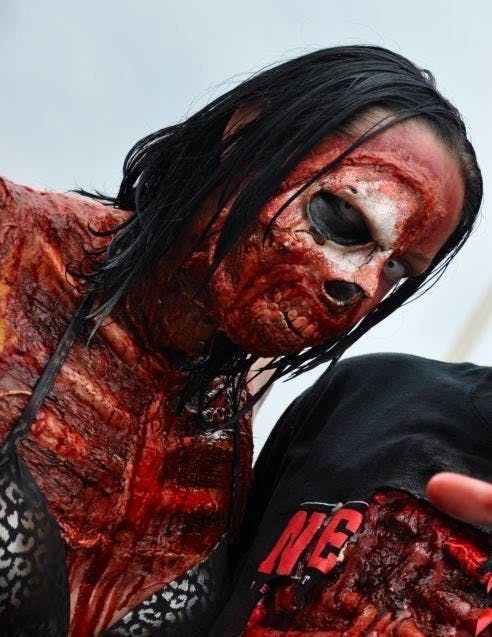 On the video shoot Garcia met Candace Mass, who had been into SFX for about as long as he had. After the project they stayed in touch, and when Garcia was offered a short film project, he knew he couldn’t do it without help. So he gave her a call to see if she might want to form a special effects company together. Mass was all for the idea.

The new partners went to meet with the director to discuss what he wanted for his film, called One More Time for the Camera. Little did he know at the time that Garcia and Mass were very new to the business and were making it up as they went along.

“He said, ‘Oh, we need a fake head, and we need to be able to chop the head off and blood needs to squirt out and I need people to look like demons,’” Garcia said. “All this in an 11 minute short film. And I’m like ‘OK, no problem.’ So then the meeting ended and I was like ‘How in the eff are we going to make a fake head that looks like the actor?’ I didn’t have the first clue how you even did it. And I signed onto this movie. So Candice was like, ‘We better figure this out.’”

The two put all of their effort into learning how to create the effects needed, pouring hours and money into research and supplies. They were successful, but not without paying a price for their experimentation.

“We went so far over the budget that they paid us that between she and I we spent an extra $1,300 just to be a part of this film,” Garcia said. “Because you’re going through materials and you’re testing, and you fail, and you’re like, ‘Goddammit, we gotta order more shit.’”

Garcia and Mass’ efforts not only worked out for the film, which did pretty well at local film fests and conventions, but they lent a great deal of credibility to the newly formed company. Garcia says that a large part of that was also due to some clever usage of Facebook.

“We were on Facebook constantly posting that we were testing materials, and would post lots of  pictures,” Garcia said. “So we’d write on Facebook, ‘Mopping up the studio from a full day of testing blood types.’ We just made it look like we were busy every day. So people saw that, and they thought we were in demand, so … fake it till you make it? And we blew up. We just exploded. The money we paid out of our pockets was worth it, in the end.”

Today Wetworks SFX churns out works for feature films, TV commercials and shows. Dark Hunters: Legacy, one of its most recent projects, is a web series about vampires coming later this year. Garcia laughs when I point out that all the good fortune came because he was willing to pretend that he knew how to make a realistic-looking bloody head.

“Oh man, I had no idea how you made a head that looks like a real person,” he said with a laugh. “That guy totally thought I had it. And in the meantime I’m scribbling down on the paper ‘How the fuck am I going to make a fake head?’”

Benito seems to possess superhuman strength to maintain the schedule he does. He gets off work and goes directly into SFX commissions, which can sometimes result in 16-hour work days.

“I still like what I do, so I’m willing to put in that time, “ Benito said. “But at this point, I’ve figured out the structure. I go to work and come home, and know I have to work some more. It’s cost me some friends though. When they do want to hang out on the weekends, we’re filming something, directing something. Luckily, the people you’re working on projects with end up becoming your friends.”

It seems clear that Benito’s passion lies with SFX, and his work is in demand. But when asked if he wanted to make the business into a full-time gig, he thought carefully before giving an answer.

“If it became my full-time job, I don’t know if I’d despise it or hate it. And if this is the thing I have to do to pay my bills, does the fun go away?” Benito said. “If I had to answer that question right now, I’d say no, I want to keep doing it the exact same way. Because my regular job is 9-5, I know exactly how much I make every two weeks and I can pay my bills. Everything else is fun.”