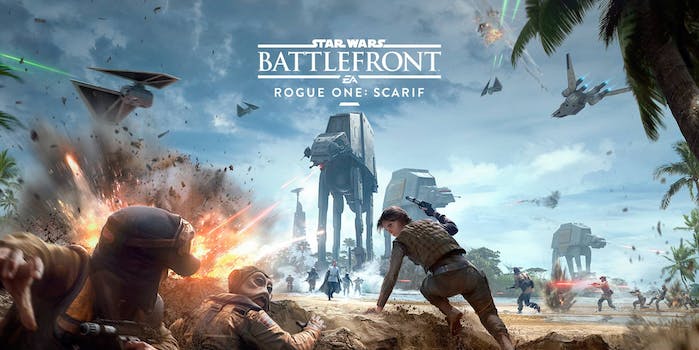 You can be a part of the mission to steal the Death Star plans, or help stop it.

A brave band of rebels are making a last-ditch effort to sabotage the Empire’s new super-weapon. Stormtroopers patrol the beaches of the tropical planet Scarif. In the skies above, U-Wings and Tie Strikers blast at each other below the planet’s shield. Jyn Erso and Orson Krennic come face to face on the battlefield. This isn’t a scene from Rogue One: A Star Wars Story, but a typical round in the latest DLC for Star Wars Battlefront.

Now live for Season Pass holders and available as a stand-alone expansion on Dec. 30, Rogue One: Scarif adds new characters, weapons, and locations from the upcoming film into EA’s Star Wars shooter. While it provides a wonderful representation of classic original trilogy moments, like the Battle of Hoth and the Death Star trench run, this is the first time the game has offered a sneak peek of something fans have yet to see on the big screen. Scarif’s biggest draw is the new game mode: Infiltration. A scenario-based multiplayer contest that plays out in three rounds, the rules differ vastly depending on the player’s allegiance. Beginning in the space above the Empire’s secret base, Rebel U-Wings are attempting to break through the shield gate that guards the facilities on the surface. But the Empire has brought massive Star Destroyers and a fleet of Tie Fighters to stop them.

Controlling the U-Wing as a Rebel pilot is the most exciting part of the initial phase, as the sleek ship moves with a speed unlike any other fighter in the game. Should the Rebels make their way to the planet within the time limit, phase two picks up on the sandy beaches below.

The Rebels need to blow up one of two Imperial dropships as a distraction, and then aid the extraction of data tapes crucial to the Death Star’s blueprint. Of course, these are the same data tapes Darth Vader comes looking for at the start of A New Hope. In this new gameplay mode (and other existing modes), players can now take control of two of Rogue One‘s biggest stars. Jyn Erso fights on the frontlines for the Rebels, and Orson Krennic is a powerful director overseeing the Empire’s presence on Scarif. Each character has unique special powers that feel distinct from any of the previously available heroes. and villains. Jyn uses a remarkably powerful pistol that can quickly extend into a rifle, and she has a strong melee attack. Krennic, on the other hand, buffs Imperial forces and can summon Death Troopers to protect him.

Rogue One: Scarif also adds new weapons, star cards, and Hutt contracts like every other expansion for Star Wars: Battlefront. In addition to Infiltration, there are maps set on the climactic location from Rogue One  for more standard gameplay modes like Blast and Walker Assault. The planets and weapons in Star Wars Battlefront have always been the most accurate parts of the game, while the scenarios they depict may stretch the limits of canon. However, based on what we’ve seen in trailers, it seems that the Infiltration mode added in the Scarif DLC will play out similarly to the climax of Rogue One: A Star Wars Story. We know that Jyn Erso and fellow Rebels sneak through the lush jungles and find the Empire’s hidden stations, extracting the plans that reveal the base’s weakness. We’ve also seen Tie Fighters, X Wings, and U-Wings engaged in combat above the shield guarding the planet’s atmosphere.

It’s safe to assume that the Rogue One missions in Star Wars Battlefront don’t spoil the events of the film, but offer a solid idea of how the final battle might play out. We know the Rebels succeed in extracting the Death Star plans, but we don’t know who will survive the events on Scarif. Before the film hits theaters, this DLC is a fun way for players to experience the action themselves. Likewise, after watching Rogue One, it might be fun to come back and look for any hidden Easter eggs and references hidden on the beaches of Scarif.