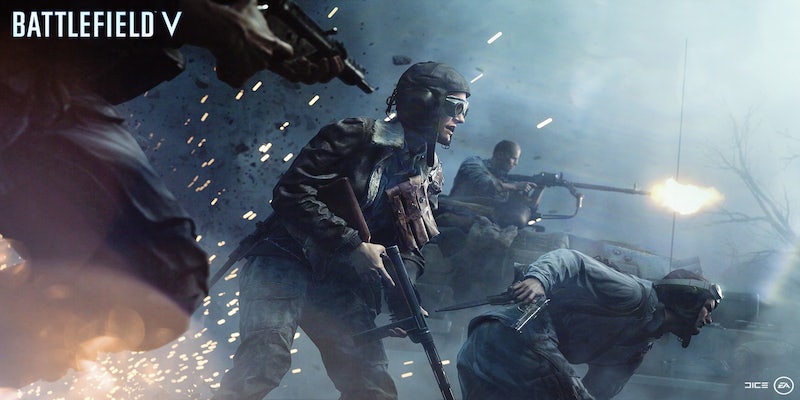 Review: Battlefield V is a gorgeous game with nothing to say

“The Great War ended and there was a deafening silence. The world moved on. In the silence, we forgot.”

This text opens Battlefield V, priming the player to consider it a sequel to Battlefield 1. But it doesn’t follow any specific characters or arcs from that exploration of World War I. Thanks to a baffling, inconsistent naming convention, V is far from the fifth proper installment in DICE’s acclaimed shooter series, but does follow 2016’s entry chronologically.

Of course, that’s because the setting is World War II. After returning to the 20th century, it only makes sense to move on to the next brutal battle. Title cards continue to set the stage for this armed conflict, contextualizing the carnage as a backdrop for Battlefield’s latest depiction of a well-explored war.

Implicit in Battlefield V’s presentation is a resolute reasoning that this bloodletting only serves to dehumanize all individuals and challenge the ideology of participating nations. After a stirring monologue from an unseen narrator warns good soldiers against considering their enemies to be human, players are thrown into a massive multiplayer arena to do just that.

This dissonance is not exclusive to Battlefield, but any message the scant single-player content tries to convey is lost under the cacophony of chaotic gameplay. As always, that chaos is stunning to look at—and hear—but V’s attempt to confront this tension head-on often falls flat.

Borrowing one of the strongest aspects from its World War I counterpart, Battlefield V’s single-player content takes the form of individual vignettes. Solving a long-standing problem for the franchise, these short stories deliver the narrative in a more direct fashion than a traditional campaign. Each series of short missions follows a certain character and offers varied opportunities to experiment with available systems and mechanics.

A preview of this mode is the first thing players will experience when starting the game. In a beautiful cinematic that touches every theater of war, players jump between individual soldiers faced with the impossible. As each successive character is gunned down, the narrator continues to elaborate on the horrors of the Second World War.

Three War Stories are included at the launch of Battlefield V, with a fourth coming next month. And while the introduction promises a celebration of unexpected heroism, their only consistency is in overblown spectacle. Average men and women are not the stars of the stories, contrary to what the melodramatic speaker would have you believe. You will only be afforded the opportunity to play as a cheeky soldier with violence in his lineage or as a silent assassin who has become the subject of local folklore.

It’s not just that the writing in these sequences is cliché; it’s that Battlefield V pretends otherwise.

For example, the stirring, orchestral soundtrack at the end of “Under No Flag” is completely mismatched with the mission’s upbeat tone following a British criminal pulled into an emerging Special Forces unit. After that cutscene fails to earn any emotion, it closes on a history lesson that summarizes the future of the English military. These mini-campaigns are so brief and sanctimonious that it’s hard to care enough even to be disappointed.

Still, they deserve some credit for offering unappreciated, non-traditional glimpses of this war. Skipping the pastiche of WWII traditions one might expect, these stories shed a light on slightly lesser known conflicts, and even preserve the native languages of their settings.

Where Battlefield V would have you believe the single-player content was meant to reveal something new about the nature of war, it’s really a disguised tutorial for the longer investment in multiplayer. Certain missions give players the chance to familiarize themselves with stealth and explosives before hopping online. Through sectioned-off combat areas, you’re given the freedom to approach objectives with a variety of guns, tools, and vehicles. It’s worth seeing each story to the end just for the production values and combat scenarios, despite the lack of any compelling narrative. 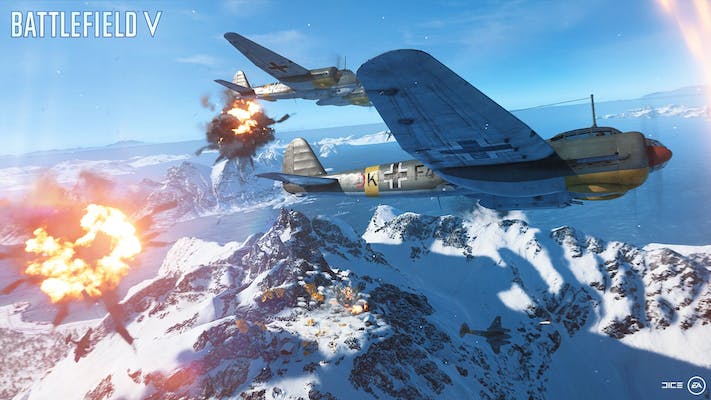 Most of the audience is likely coming to Battlefield V for online play, anyway. On that front, this package has the most viscerally stunning scenarios in the series’ history. Where Battlefield 1’s maps were sprawling panoramas, the open areas found here are layered labyrinths fraught with peril.

Through crumbling buildings, city squares, and quiet mountain hideouts, each player-vs.-player mode tells a different story. Unlike the flat presentation of the authored story content, the simple setups offered in online play actually drive home the futility of ritual combat. Every setting is clearly established before the match begins. Rotterdam becomes more than just a dilapidated urban precinct when it houses the Dutch opposition to an encroaching opposition. What this accomplishes is a grounded contextualization of every player action. The enemies you’re hunting down aren’t just ghosts in a shooting gallery: They are now, and were then, human beings.

Engaging in Battlefield’s combat has never been more comprehensible. Squads have been reorganized to offer constant reward, in the form of ammo and health bonuses, as well as mobile spawn points. You won’t need to be in constant communication with fellow players to get ahead, though it can’t hurt. As a match progresses, you’re rewarded for changing your class, helping allies, and building fortifications rather than hunting the other team.

Most of Battlefield V’s game modes turn human life into currency. Infantry-focused sessions expire when one side’s reserve of respawns run out, while larger-scale point capture is balanced by granting more chances to the winning team.

Using different classes to capture objectives, heal teammates, and stake out vantage points provides a suite of roles for every player to occupy. I never felt the need to run-and-gun alone, but rather I stuck by the players on my side and took turns laying suppressing fire or supporting the squad.

This entry preserves everything players love about the Battlefield franchise. Buildings fall apart over the course of each clash. Dynamic explosions and weather make the ground feel alive in a way few other first-person shooters can. Thanks to a rotating list of challenges and progression for every class, every weapon, and every skill, there’s a lot to keep anyone occupied for the foreseeable future.

And if that weren’t enough, it seems like the best of Battlefield V is yet to come. A shooter wouldn’t dare launch in 2018 without at least teasing a Battle Royale mode, and Firestorm is coming a few months down the line. Emphasizing squad play over lone wolf tactics, the mode seems to adapt Battlefield’s strategic combat into the popular survival trend. It will be interesting to see if this mode manages to feel more organic for the series than Call of Duty‘s experiment with Blackout.

In a transparently consumer-friendly ploy, EA and DICE have promised a wave of substantial, free content updates for this game in months to come. Co-op modes, a practice range, and even another single player mission will appear before the end of the year. These “chapters” will further the journey players take through this imagining of World War II, bringing fresh maps, new deployments, and advancing stories seen through the eyes of various participants.

All of this furthers the idea that Battlefield V is deeply interested in portraying the most infamous conflict of the 20th century differently. The perspectives offered in the War Stories attempt to move away from the celebratory nature of the genre’s past, even if they turn into bombastic jaunts themselves. By opening with an appeal to uncover the humanity of a profoundly inhumane atrocity, the game gestures that it so desperately believes it can say something new.

“The Great War ended and there was a deafening silence. The world moved on. In the silence, we forgot.”

A reminder not to let the horrors of war go unremembered. I keep coming back to this text, the first thing Battlefield V showed me. The game seems to want credit both for pointing out the cruelty of its actions, and for the intense pleasures I felt partaking in them. Maybe there is a version of this game that’s willing to come down harder on any one side of that dichotomy. As it stands now, Battlefield V is a beautiful depiction of an ugly war that offers only a few fleeting chances to reflect on what it meant.

And then the bullets start flying.

Battlefield V is available for PC, PlayStation 4 and Xbox One on Nov. 20. This review was based on an Xbox One version of the game provided by the publisher.