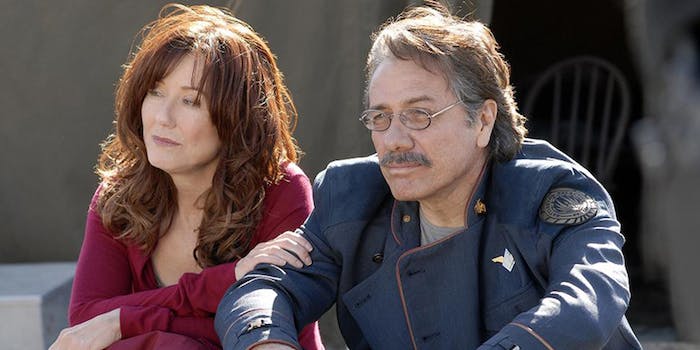 We’re getting a whole new ‘Battlestar Galactica’ in movie reboot

Battlestar Galactica is back. Again.

This time it isn’t another Caprica-style spinoff from the mid-2000s TV series, but a completely new reboot. According to a report from Variety, BSG’s original creator Glen Larson has signed on to produce a new reimagining of the classic series, with no canonical connection to its cult TV reboot.

This seems like kind of a weird decision, to say the least. The “new” TV version of BSG only finished in 2009, and lives on in the popular sci-fi consciousness as the gritty reboot to end all gritty reboots. Edward James Olmos is Commander Adama. Katee Sackhoff is Starbuck. Come to think of it, will the movie reboot keep the new version of Starbuck as a woman, or go back to him/her being a cocky 1970s dudebro?

We obviously don’t know many details at the moment, but one thing’s for sure: it’ll be an uphill battle to win over fans of the recent TV series. Even The Amazing Spider-Man had its detractors, and that was made five years after the cataclysmically terrible Spider-Man 3. The series finale of Battlestar Galactica may have faced a fair amount of criticism, but not enough to warrant a public outcry for a total do-over.

X-Men director Bryan Singer has previously been rumored to be working on a BSG reboot, a good choice if Universal decided to make the new movie a bit more family-friendly than the increasingly depressing tone of the TV series. However, Singer is tied up in X-Men projects for the next few years, so it’s anyone’s guess how this movie will end up looking.