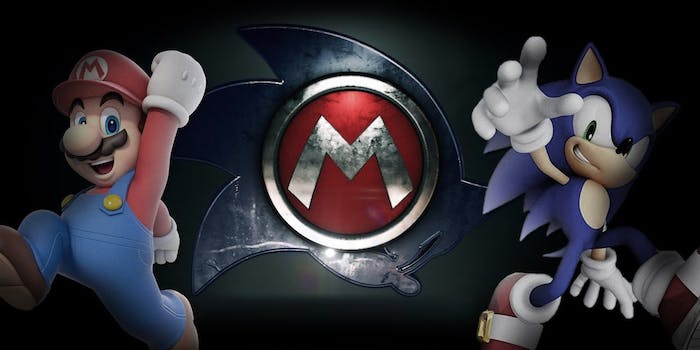 Tell me Mario, do you bleed?

Your favorite Nintendo-universe rivalry may be Mario versus Bowser, but IGN’s new trailer remix may change your mind.

Riffing off of the teaser trailer for the upcoming Warner Bros. and DC Entertainment film Batman v Superman: Dawn of Justice, Mario v. Sonic: Dawn of Smash is everything Super Smash Bros. fans could ever ask for.

The trailer stars Caped Mario from the Super Mario World series as Superman, with traditional Sonic filling the role of Bruce Wayne. If that weren’t enough, Metal Sonic appears as Wayne gets into characters as The Dark Knight.

But it’s not the first time we’ve seen Mario and Sonic collide. The two characters (and their friends and foes) first battled in Mario & Sonic the Olympic Games for Wii in 2007. Then in 2008, Sonic made his debut in Super Smash Bros. Brawl for Wii as well.

While Mario v. Sonic: Dawn of Smash will never see a release, Nintendo fans can only imagine what such a movie would look like. Would Bowser star as Lex Luthor? Would Princess Peach be Lois Lane? Would Knuckles be Robin? And most importantly, what would Luigi do?