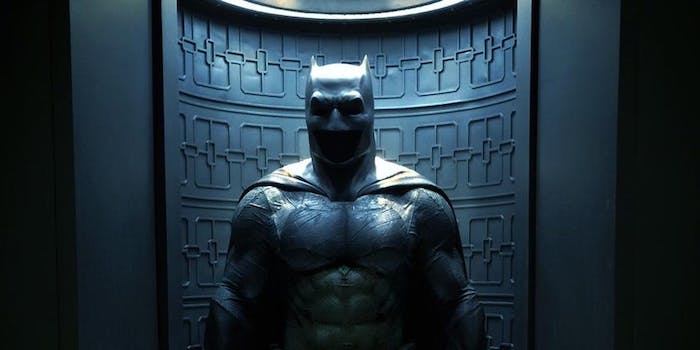 What the new Batsuit tells us about Ben Affleck’s Batman

Following the new Batman v Superman: Dawn of Justice trailer, director Zack Snyder has given us a closer look at the new batsuit.

Bruce Wayne is opting for another chic and minimalist matte-black ensemble, unlike Superman who appears to be sticking with his Man of Steel costume. (To be fair, Clark Kent probably can’t afford regular wardrobe upgrades on a reporter’s salary.) Based on the full-length photo posted by Snyder, we’ve garnered some new clues about Ben Affleck’s Batman.

Otherwise, our main takeaway here is that Affleck’s Batman ears are not quite as adorable as they looked in the first publicity photo. We’ll miss you, cute lil’ kitty ears.

Snyder also shared a couple of posters for Monday’s Batman v Superman IMAX trailer “event” (i.e. a slightly elongated version of the new trailer), which inform us that this movie contains both Batman and Superman and comes out in 2016.