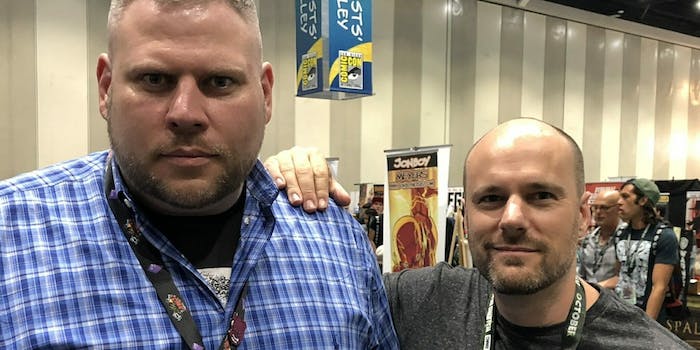 If you thought we could start San Diego Comic-Con without a depressing story about toxic fandom, sorry. It looks like one of DC’s star writers got so many death threats, he had to bring a bodyguard to the convention.

Tom King has been writing Batman since 2016, to critical acclaim and commercial success. The comic is widely regarded to be a hit, although it’s not without its detractors. In a tweet from SDCC, King revealed that his employers hired a bodyguard in response to death threats over the comic’s 50th issue, which came out a couple of weeks ago.

Because of the Batman 50 death threats they got me a bodyguard for the Con. This is David. He is presumably already very bored with endless looking for toys.

For my uh kids. pic.twitter.com/snbBYMHwcx

It’s not unusual for comics creators to get harassed on social media, but this is the first time we’ve seen someone hire a bodyguard for protection.

Batman #50 was the culmination of a long storyline leading up to Batman and Catwoman’s wedding, but the finale didn’t turn out as many fans expected. In the long tradition of plot twists in superhero comics, some fans got vocally mad about it. The storyline was so controversial that DC is allowing comic book stores to return unsold issues of Batman #50 and its spinoff Catwoman #1, after retailers accused the publisher of false advertising.

Hopefully, King’s convention experience will continue without a hitch. And elsewhere, we hope that whoever sent death threats about Batman’s wedding feels suitably bad about what they’ve done.