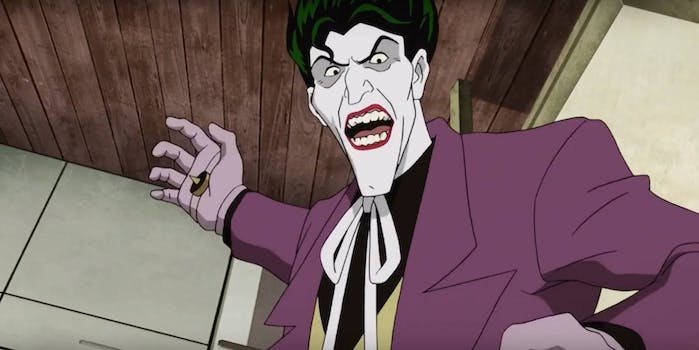 Mark Hamill and Kevin Conroy face off in ‘Batman: The Killing Joke’ trailer

Get excited for this R-rated adaptation of the classic comic.

The trailer for the animated film Batman: The Killing Joke, featuring the voice acting talents of Kevin Conroy and Mark Hamill, is finally here.

The Killing Joke is one of the most iconic stories in Batman canon, and for many years fans assumed it would never get a screen adaptation. But thanks to the growing popularity of superhero movies—and a desire for a more “authentic” Batman movie compared to Warner Bros.’ Justice League franchise—it got the greenlight last year.

Fans will recognize plenty of callbacks to the original comic in this trailer, which emphasizes the R-rated nature of the story. Unlike Conroy and Hamill’s previous work in Batman: The Animated Series, this movie isn’t suitable for children.

The movie will premiere at San Diego Comic Con in July and will be released on home video later this summer.