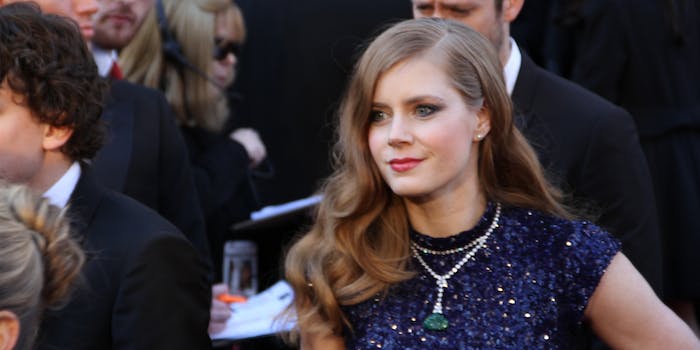 The leading ladies apparently have better things to do than fight over a man.

Man of Steel actress Amy Adams (Lois Lane) has confirmed there won’t be any catty female rivalry subplots in Batman v Superman: Dawn of Justice. Because apparently that was a serious concern now there are two main female characters in the movie.

In an interview with Coming Soon, Adams rejected the idea of a Lois Lane/Superman/Wonder Woman love triangle. “They always think that if you put in another woman and automatically… ‘Catfight!’ No, I think that’s a male fantasy thing. I don’t think that’s reality.”

Batman v Superman will introduce Batman and Wonder Woman to the franchise that began with Man of Steel, along with cameos from fellow Justice League characters Aquaman and Cyborg. It turns out that some fans were concerned there might be a rivalry between Lois Lane and Wonder Woman, because you can’t have two women in the same movie without them fighting over a dude. Or something.

Superman has dated both characters in various comics, but this will be the first time Lois Lane and Wonder Woman appear in the same movie. A love triangle would have been a pretty surprising direction for Zack Snyder’s gritty vision of the characters, though.

A less optimistic explanation for the lack of “catfights” in Batman v Superman is that the two female characters just don’t share much screen time. In the same interview, Adams said she was glad when Gal Gadot was cast as Wonder Woman because, “it was a nice to have another girl on set, even if we don’t work together a lot.” So, don’t hold your breath on this one passing the Bechdel Test.

Now we’ve got the catfight question out of the way, someone needs to ask Henry Caville or Ben Affleck whether their characters are fighting over a girl. After all, what other reason could there be for the titular Batman v Superman conflict?