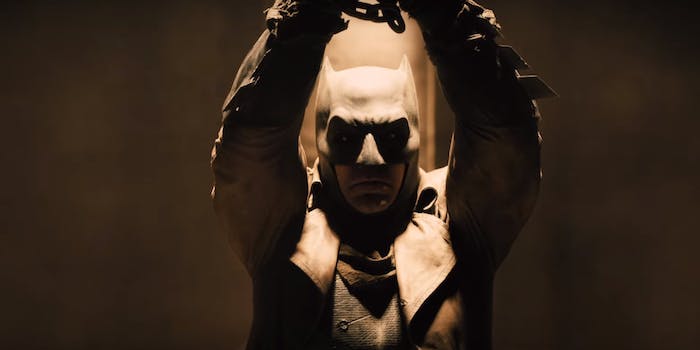 Is this ‘Batman v Superman’ clip a fake out or has Superman completely lost it?

OK, we find this really difficult to believe.

If you take the new Batman v Superman teaser at face value, it includes a surprisingly big spoiler for the movie. So, we think it’s safe to assume it’s a great big fake-out.

In the clip, Batman is chained up in some kind of cell, guarded by soldiers who bow down when Superman enters the room. Superman then tears off Batman’s cowl, revealing his face—and therefore, his secret identity. Since the movie isn’t even out until March, it seems unlikely that such a major twist would be revealed in a mere teaser trailer.

There are already a few clues suggesting that this scene is a dream or hallucination. From a characterization perspective, it’s hard to believe that Superman would ever make soldiers bow to him like some kind of tyrant, even if he were in a situation where he wanted chain Batman to the ceiling. Then there’s the matter of Batman’s brown trenchcoat, which fans have already identified as his “Knightmare Batman” costume from one of the film’s tie-in toys. Could this be the nightmare in question?

At the moment, we’re guessing this scene has more to do with Bruce Wayne’s personal fears than the “real” plot of the movie. With Superman going mad with power and exposing Batman’s secret identity, it feels like a worst-case scenario from one of Bruce Wayne’s nightmares.

Either that, or this movie really is characterizing Superman as a villain, which would certainly be an interesting angle after Man of Steel.