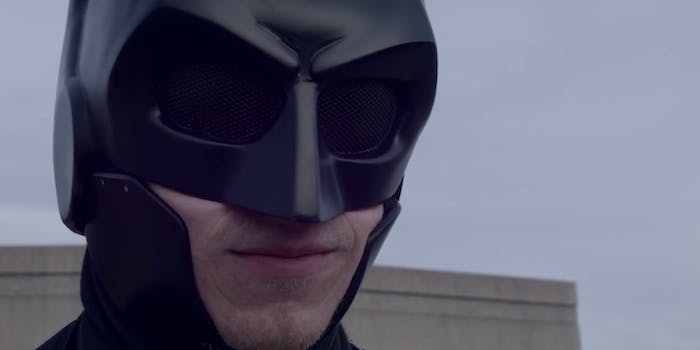 The Kickstarter-funded suit of armor is slash, stab, and Joker-resistant.

Industrial design student Jackson Gordon wanted to build a better Batsuit. Now, after a modest but successful Kickstarter campaign, he’s putting what may be the world’s first combat-ready Batman suit into high gear.

In a YouTube stress test that Gordon shared on Wednesday, his suit gets punched, stabbed, kicked, and pummeled without undergoing any wear and tear.

While not being bullet proof, the suit does guard against punches, blades and clubs, through a combination of impact absorbing foam, Kevlar, and 1/4″ Kydex plating.  The project took 3 months of prototyping and 2 months construction on the finished suit, with roughly a $2,000 budget, much of which was raised on kickstarter.  The finished suit clocks in at 25 pounds, relatively light considering the weight is evenly distributed over the wearers entire body.

Gordon, 21, has already started his own company, Armatus Designs, in order to make and sell the Batsuit and other high-quality props and costumes. Given the suit’s resilience, he might also want to consider bidding for a contract from the U.S. military.

I hear they’re installing a bat signal on the roof of the Pentagon.